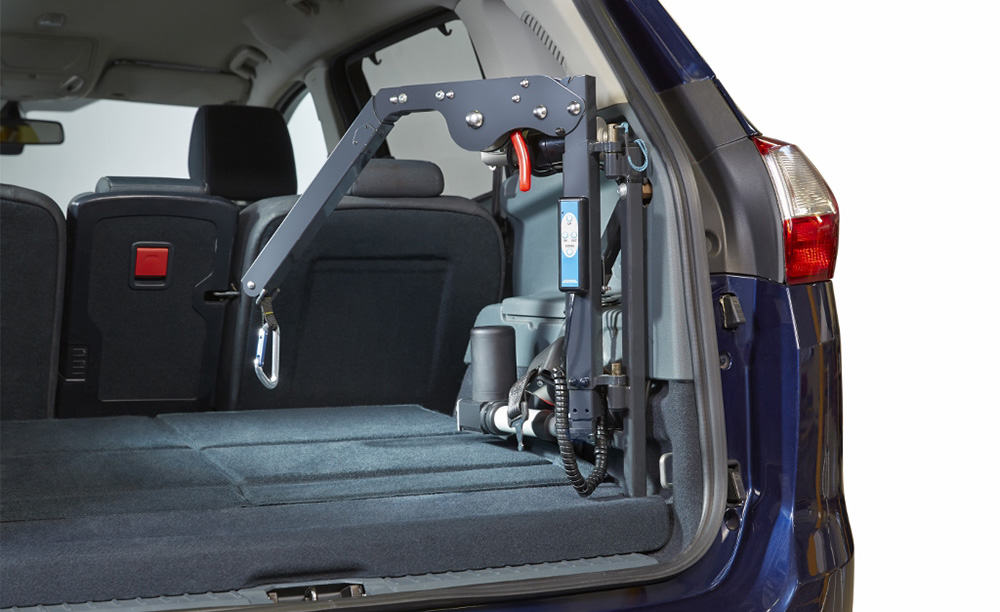 A woman suffering from arthritis has paid tribute to vehicle adaption firm Autochair and a hoist installed almost two decades ago which has helped her retain her independence.

John Edwards said the expertise of Autochair’s founder David Walker, who set up the firm more than 30 years ago, had greatly benefitted his wife Hetty’s life after a scooter hoist was first fitted into their car in 1997.

Hetty Edwards arthritis makes it difficult for her to get about which led to the couple purchasing a scooter, however it was too heavy for her or her husband to lift into their Mitsubishi Shogun so they turned to Autochair for a solution.

Mr Walker measured the car and arranged for them to have a new 100kg Fold Down Mini Hoist fitted into their Shogun. The couple, who live in Worthing, Sussex, transferred the hoist when they changed their car to a Ford Galaxy in 2003.

Hetty has recently upgraded her scooter to a far lighter model which was light enough for Mr Edwards to dismantle and place into the boot himself, however time has since caught up with them again and Mr Edwards no longer wants to lift the scooter. The couple again employed the assistance of Autochair and had a new Mini Hoist fitted into their new Galaxy bought through the Motability scheme.

The original hoist is also still in use and is still fitted in the couple’s original Galaxy, which now resides in Spain, where the Edwards’s live during the winter months.

Mr Edwards said: “Mr Walker was working out of a small workshop when we met him in Bakewell and I recall that he was a very pleasant and a proficient engineer. Looking back, I’d really like to thank him, because that hoist has been of great benefit to Hetty over the years.

“We didn’t have to use it for a few years because Hetty’s new scooter was light enough for us to carry on a plane rather than drive to Spain, but we need a little bit more help these days, which is why we have got a new Mini Hoist fitted and it’s fantastic.”

Confined to a wheelchair following a road accident in 1975, David Walker invented a device mounted on the roof of his car which could load and unload his wheelchair, allowing him to travel to work independently.

When he started receiving orders for his product, he turned his invention into a living, establishing Autochair in 1983 and in 2014 was awarded an OBE from Her Majesty the Queen for his services to people with disabilities.