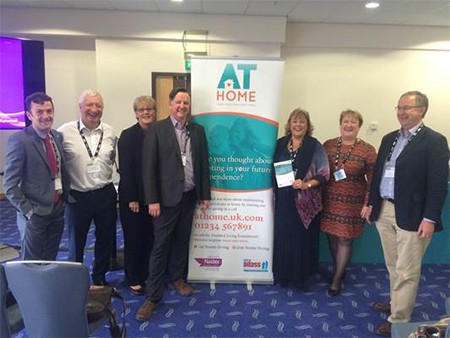 14 local authorities in the West Midlands have come together to launch a new campaign that will be aimed at people aged 55+ who are thinking about later life but might not have experienced any major daily living difficulties as yet.

The AT Home campaign will use a range of channels and media and will encourage people to think about how independent living and mobility equipment can help people to continue to live independently in a healthy and safe environment at home. The campaign is supported by Naidex.

Research has consistently confirmed that awareness of Assistive Technology is very low, held back by a combination of factors, including the historical dominance of this sector by the State. A recent study led by Coventry University found that 60% of consumers questioned said that lack of awareness was a barrier to greater use/purchase of Assistive Technology. However the same research also found that 85% felt that the costs of purchasing were worth it given that it would make life easier*. This demonstrates that people are willing to pay, from their own pockets, for products and services, provided that they feel it will help.

This initiative aims to reach people whilst they might still be termed a ‘consumer’,before their needs increase and to help prevent them from tipping over to becoming ’a patient’ or service user.

In England almost a third of the population are aged 55+ and an estimated 4.7m people aged 65+ have a limiting longstanding illness that affects them in some way, this equates to 48% of all people aged 65+**. In many instances Assistive Technology, when used as part of a wider package, can help maintain independence, enabling people to live longer in their own familiar home surroundings, thereby potentially helping to avoid having to consider moving into specialist housing or a care home in later life.

Commenting on the launch of the campaign Linda Sanders, the ADASS National lead for Assistive Technology said: “The 14 local authorities in the West Midlands have come together to support this campaign to raise awareness of the simple bits of technology that are available from the high street to assist people to remain independent at home and to prevent them from relying on much stretched public services.”

Ian James the West Midlands chair of ADASS added “This is a great example of councils collaborating together to promote a simple message across our region about what friends and relatives can do to help their loved ones stay at home and maintain their independence without needing to involve council services .”

Matthew Tingey, Naidex Event Director commented “Last year Naidex allocated a fund to its Ambassador panel, made up of senior figures representing the public sector, businesses, the British Association of Occupational Therapists and voluntary organisations working in the sector so that they could tackle a burning issue of their choice. After debating a number of potential initiatives Ambassadors kept returning to the compelling issue of raising public awareness. As the preeminent show in sector, Naidex is delighted to be supporting this campaign and hope that this will be the beginning of something much greater.”

The website, which will be live in a few weeks’ time, HERE