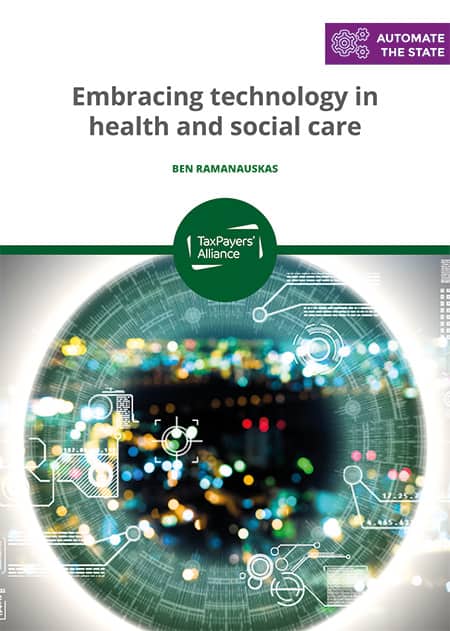 A new report by the TaxPayers’ Alliance (TPA), and launched by the Rt Hon Matt Hancock MP, Secretary of State for Health and Social Care, has been unveiled which looks at the importance of having more automation in the NHS.

The report – ‘Embracing technology in health and social care’ – emphasises that the NHS needs to improve and stop wasting money, something which can only be done if the NHS embraces technology and innovation.

The launch of the TPA’s report comes as the UK is experiencing a radical demographic shift, with figures from the Office for National Statistics forecasting that the number of people in the UK aged 85 and over is expected to double from 2016 to 3.2 million people by 2041.

With this ageing population comes an increased pressure on the health and social care sector.

The TPA says, in its report, that automation within the NHS can help tackle these issues as it addresses staff shortages through freeing healthcare professionals from more repetitive tasks and allowing them to focus on patient care.

These combine to give potential annual savings of up to £18.5 billion by 2031.

There are barriers to entry into the NHS for companies offering innovative healthcare solutions. Many are being addressed and in the long-term it’s crucial that the NHS remains open to new ideas and innovation to make further productivity gains.

Example case studies within the report

OWise is the first personalised care app for patients with breast cancer. It allows patients to record, in real time, their side effects and overall quality of life, and collates fully anonymised patient-reported data with a view to improving clinical outcomes for cancer. It therefore allows clinicians to tailor care for their patients.

WaitLess is an app that reduces pressure on A&E by providing patients with real time information on local services and waiting times. It currently has 125,000 users and has resulted in an 11 per cent reduction in minor injuries activity in A&E.

This latest report from the TPA on technology is part of its wider campaign to encourage the rapid increase in the automation of public services.

Commenting on the report, John O’Connell, Chief Executive of the TaxPayers’ Alliance, said: “British taxpayers people pay for, and deserve, world-leading public services. The Government has committed to making the NHS a major spending priority, but everybody knows that its going to take more than just money to improve health services in this country.

“The biggest priority should always be striving towards better outcomes for patients, which means freeing up NHS staff from monotonous tasks and giving them more time to spend on real care. Exciting developments in technology could deliver savings for taxpayers – but also, crucially, save more lives.”

Founded in 2004 by Matthew Elliott and Andrew Allum, and now with 80,000 supporters, the TaxPayers’ Alliance fights to reform taxes, reduce spending and protect taxpayers.