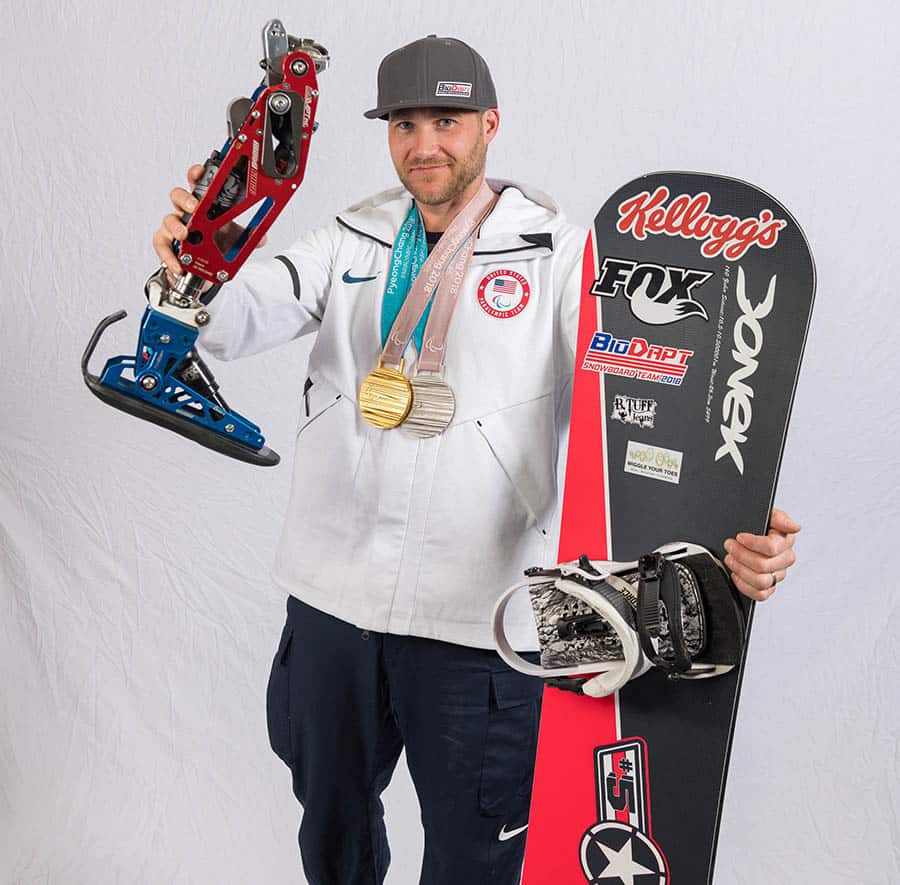 Lovingly named “Monster Mike”, Mike Schultz has been a snowmobile racer since his high school days, going professional in 2003. But everything changed after a racing accident meant he lost a leg.

Instead of abandoning his racing dreams, Mike picked himself back up — using a specialist prosthetic leg he machined himself and with the support of Sandvik’s machining solutions.

Once one of the world’s top five snowmobile racers, Mike’s life-changing moment took place during what began as an ordinary competition.

“I’d had a bad start during the qualifying race, so I was pushing to catch up in an attempt to make the finals,” explained the 36-year old from Minnesota, USA. “Coming downhill, I came off my sled and landed painfully. My entire knee was blown to pieces.”

With a nearby snowstorm grounding helicopter flights, Schultz was rushed to the nearest trauma centre — some five miles away. “Surgeons attempted to save my knee, but three days and 47 units of blood later, my kidneys were shutting down. That’s when doctors woke me up and told me they’d be amputating my leg.”

Five weeks after, he could walk again. “It was great to get back on my, human and prosthetic, feet,” said Mike. “But despite my relief, my racing days were over. If I couldn’t compete at my previous level, I didn’t want to compete at all”.

Months after dismissing his sporting career, Mike discovered the X Games Supercross Adaptive sports competition. The X Games is an annual extreme sport event for world champion-standard athletes and the adaptive sports section for people with disabilities is just as extreme as its mainstream divisions.

Mike knew he had to enter, but his prosthetic simply didn’t have the right flexibility and endurance properties. He needed a leg that wouldn’t just enable him to compete, but actually win the competition.

“I knew of one type of sport-capable prosthesis, which had a coil-over shock, but it was designed for downhill skiing,” he said. “Its spring rates were too stiff, and the range of motion wasn’t anywhere near the 135 degrees needed for snowmobiling.”

Instead, Mike built his own racing leg. High school drafting classes were the extent of his engineering education, but a lack of expertise didn’t dampen his determination.

“I think mechanically, and I’ve always been a problem-solver,” he added. “I listed what I needed the knee to do: it had to absorb shock; bend at least 135 degrees; and it had to be adjustable for different sporting activities.

“The toughest part was coming up with a linkage system to give a progressive feel to the spring rate, but using only a two-inch stroke shock.”

With his checklist in mind, Schultz used a FOX mountain bike shock as the guts of his new prosthesis. Within a month, he had a good working drawing, which he brought to a nearby shop.

“They quickly taught me how to use the mill and lathe,” he said. “I remember the feeling when I pulled the machined parts out of the mill, bolted it all together and stuck it on my leg,” he says. “I got on a dirt bike that same day, grinning ear to ear. It was an amazing feeling. I could stand up on the bike, balanced, just like I had two good legs.”

Mike hasn’t looked back since. Less than five months after the accident, Mike and his new knee raced motocross at Michigan’s Extremity Games, qualifying him for the 2009 ESPN Summer X Games Supercross.

Over the past eleven years, Monster Mike has forged his name in the world of adaptive sports, taking home ten gold medals in the Motocross, Snowcross, and Snow Bike categories at the X Games competition, as well as gold and silver medals at the 2018 Winter Paralympics.

Mike gained even more exposure after appearing on the American Edge Factor television show, which covers modern manufacturing and innovation, and was sponsored by Sandvik Coromant.

While his prosthetic was a result of his own genius, Sandvik recognises this true feat of engineering and determination. Sandvik Coromant offers a large range of advanced tooling and machining solutions for medical devices including hip joints, bone screws and dental plates.

“Medical is one of the most technically demanding industries in the world. With increasingly difficult to machine materials, precise specifications and constant time restraints, the machining of medical parts is no easy task,” said JoAnn Mitchell, Senior Project Leader at Sandvik Coromant USA.

“As the global leader in metal cutting technology and innovation, it’s part of Sandvik’s responsibility to help our customers be successful in their endeavours, as well as to help people outside the industry understand the value of metal cutting in modern life.”

Alongside his passion for competing, Mike has developed another love, one which is a gift to fellow athletes. His work on high-performance prosthetics has led him to open his own manufacturing company, BioDapt, which markets his high-impact, highly adjustable Moto Knee and its companion, the VF2 prosthetic sports foot.

“I’m committed to showing others what an adaptive athlete is capable of with some motivation, hard work and the right equipment,” he said.