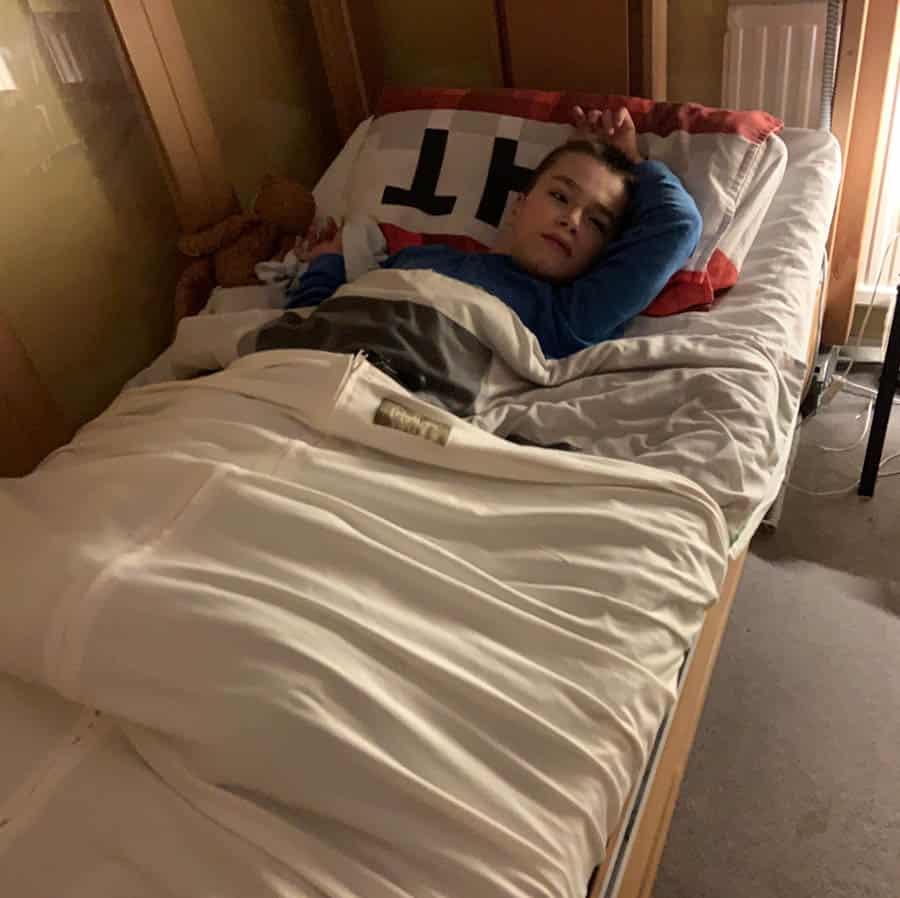 13-year-old Elliott Baker from Oxfordshire is benefitting from using Fidgetbum™, a pioneering non-medicinal sleep aid which was the brainchild of Mel Wood.

Elliott has Kernicterus, a condition which has symptoms similar to athetoid cerebral palsy but also effects Elliott’s hearing, speech and eye movement. It can also cause muscle spasms that can cause arching of the back and neck. Another side effect that Elliott experiences is difficulty in getting to sleep and general restlessness during the night.

Over the years, Elliott’s parents Peter and Caroline have struggled with helping Elliott to sleep.

However, from the first night of using Fidgetbum™ Elliott slept better.

“With the Fidgetbum™ secured over Elliott’s duvet he no longer kicks his duvet off resulting in a better night’s sleep and not feeling as tired the following day,” Caroline continued. “I am so grateful to Mel for coming up with such a simple but effective idea and I would not hesitate in recommending it to anyone of any age with sleep issues. I have already shown it to Elliott’s Occupational Therapist so she can tell her other clients about it.”

Elliott also loves his Fidgetbum™, commenting: “I find it really comfortable to sleep with and it is just tight enough to hold my duvet in place but not too tightly. I also really like the material.”

Fidgetbum™ is a soothing, non-medicinal sleep aid, which is available in a range of sizes. A stretchy wrap-around device that snugly holds the covers in place, without restricting the person in bed.

The sleep aid also provides a sense of security that sleep experts have likened to a warm hug and can be used from toddlers to the elderly, Fidgetbum™ says.

For more information on the full range of products available from Fidgetbum, call 020 3714 4497, email mel@fidgetbum.com or visit the website