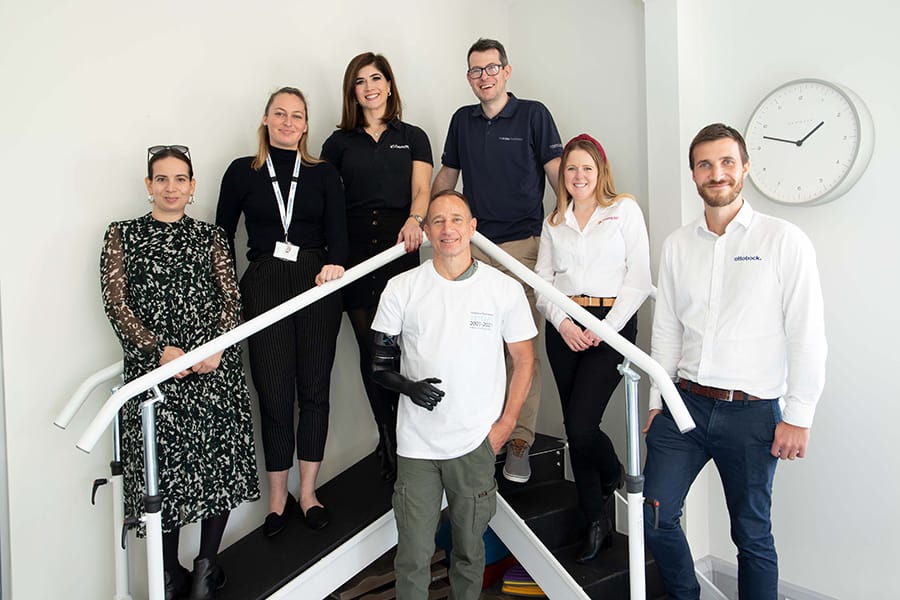 Three of the country’s largest prosthetic manufacturers – Steeper, Ottobock and Össur – have combined their resources and expertise to support an NHS orthotist after a catastrophic accident changed his life forever.

Married father of two, Jim Ashworth-Beaumont, 55 from Greenwich, London, suffered horrific injuries as a result of an accident whilst training for the British Triathlon Championships in June 2020.

After graduating from Strathclyde University, Jim started his career in 2000 as an orthotist at Kings College London. In 2004, Jim moved to the Royal National Orthopaedic Hospital (RNOH) at Stanmore and remains there to this day.

“I relish the challenge of finding orthotic solutions for patients with complex needs,” said Jim.

After an incredibly pressured and busy time throughout the first lockdown of the pandemic working at the RNOH, lockdown lifted and Jim took the opportunity for some well-deserved leave. In June 2020, whilst cycling in London, the unthinkable happened. After many years of supporting patients, Jim’s own life took a dramatic turn; whilst waiting at a set of traffic lights on his bike, out of nowhere, an articulated lorry ‘side swiped’ him trapping Jim under its wheels. In an instant, Jim’s life would change forever.

As a result of this accident, Jim’s right arm was sadly not able to be saved and was amputated at the scene. The amputation itself was mid-way up his humerus. After being freed from his entrapment, Jim was rushed to Kings College Hospital where he began his career all   those years ago and spent the next 6 weeks in a coma.

Emerging from his coma, Jim had to come to terms with his condition. After a discussion with his orthopaedic surgeon, he was informed that he was lucky to be alive given the extent of his injuries both external and internal.

“It was a bit touch and go for a while,” said Jim.

Despite his vast array of injuries, the most frustrating thing for Jim was the fact he had sustained drop foot. Drop foot is a muscular weakness or paralysis that makes it difficult to lift the front part of your foot and toes. Usually, someone with drop foot would use walking aids to prevent them from falling but because Jim’s arm had been amputated, this wasn’t an option for him.

“It was quite amusing as the physio’s would get me out of bed and say right, walk or fall over,” remembers Jim with a smile. “The trust have been incredibly supportive throughout this whole ordeal. It wasn’t a case of whether I could go back, but more of in what capacity.”

During Jim’s rehabilitation, he was introduced to Alan McDougall of ProActive Prosthetics, and he began to discuss his goals and potential outcomes he could expect from prosthetic treatment, one of the first being returning to work as an orthotist. 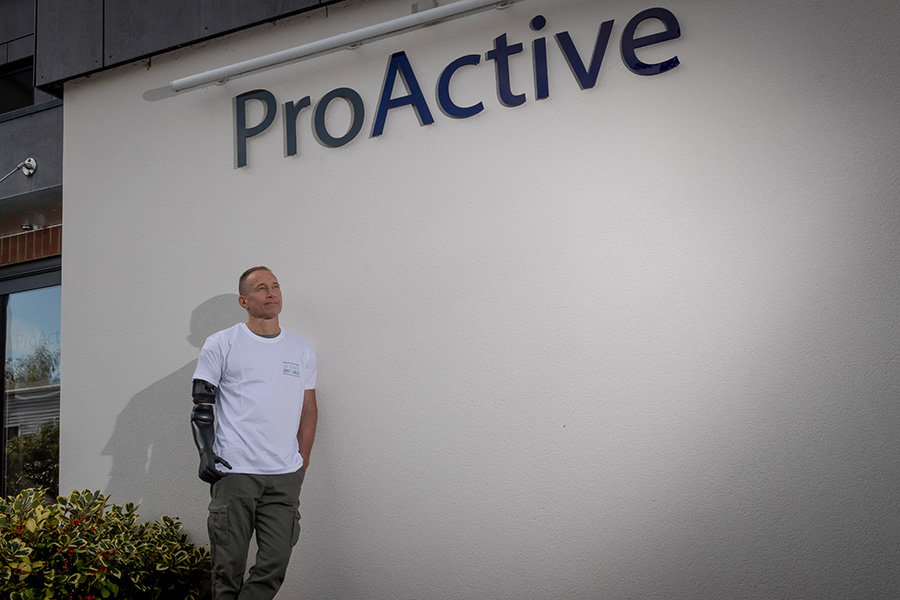 Without hesitation, all three companies jumped at the chance to support “one of their own” and play a small part in helping Jim to get back to work and to get on with his life.

Jim has now been fitted with his prostheses, which allows him to carry out day-to-day tasks and his job but is also fit for his future plans.

“I have been completely blown away by the cooperation and generosity of these three amazing companies,” Jim continued.

For everyday activities and work, Alan recommended the Steeper Espire Elbow. A “revolutionary” powered elbow, the Espire Pro is easy to use and features a fantastic anatomical shape with a free swing option, which emulates a more natural silhouette when walking. The elbow features a comfortable centre of mass, and the powerful battery means the device can be used all day, ideal for Jim whilst at work. The electronic lock and accessible power button add ease for carrying out daily activities and Jim’s busy job as an orthotist.

Espire Pro is compatible with multiple wrists and terminal devices making it an excellent starting point for Jim’s prosthesis. The elbow control strategies are flexible enough for Jim to operate the hand, or wrist and elbow simultaneously.

He added: “The elbow amplifies the power of my body movement and allows me to get my hand to where it needs to be quicker. The natural shape and long battery life are a real added bonus.” 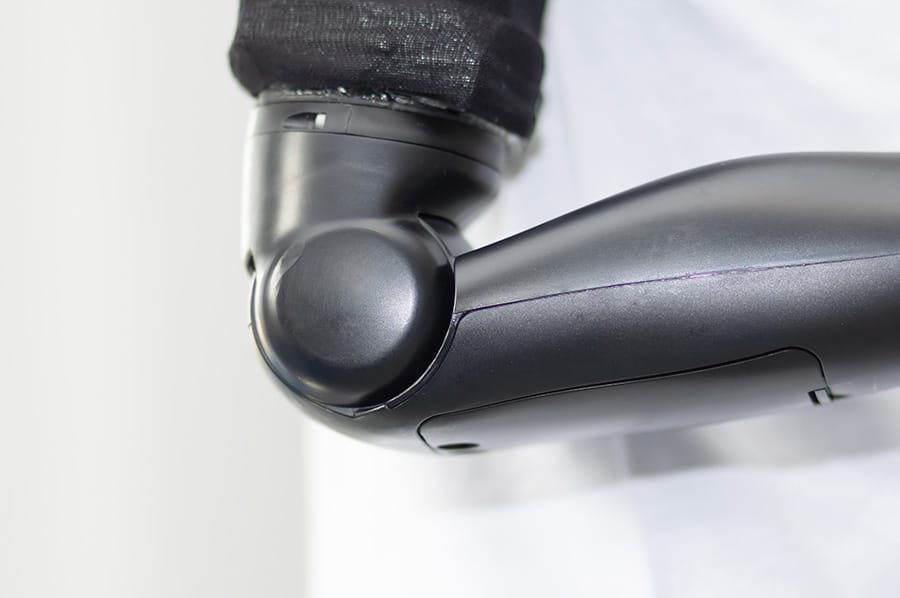 To enable Jim to perform his professional duties effectively, when he returns to his full ranges of activities at work, Jim has been fitted with the Ottobock Greifer and Wrist Rotator.

The Greifer will help Jim to work precisely, and it enables a powerful grip, supporting both detailed tasks as well as the handling of heavy objects. Different gripping tips (wide, narrow or rubber coated) allow further adaptation for special tasks, and the additional LED lamp illuminates the working area perfectly. The electronic wrist rotator is really helpful in that it allows Jim to fully orientate the terminal device without interrupting what the natural left arm is doing.

He commented: “I love how simply the Greifer is to use and especially the way the jaws runs in parallel. I find it very easy to gain fine control of the opening and closing speed.”

has a unique way to change grips by using simple gestures. It offers precision, power and intelligent motion.

“The hand offers me an extremely high level of dexterity,” said Jim. “The gesture control is my favourite grab option”.

ProActive Prosthetics has cast and made a custom fitting socket for Jim and made an arm to incorporate all the technology supplied by Steeper, Ottobock and Össur. This is a vital piece of the jigsaw in helping Jim to get the most of all these components.

Now almost 18 months on from his accident, Jim has returned to work, getting back to his full range of activities at RNOH in Stanmore and is looking to complete a Masters in Sports and Rehabilitation Psychology. 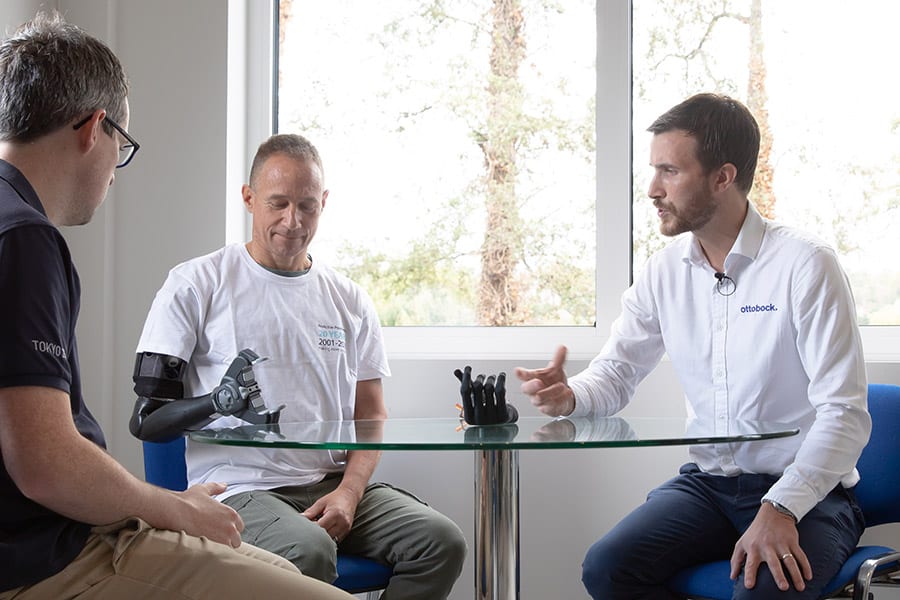 Jim has had time to reflect on what has happened. Now that he is further along his rehabilitation journey, he is sure his positive attitude will help him along his future path.

“If I could offer any advice to others going through a similar ordeal to me,” Jim concluded, “I would say don’t get bogged down in the detail. Keep hold of your dreams and your ambitions and be prepared to adapt. Because that’s what life is all about.”