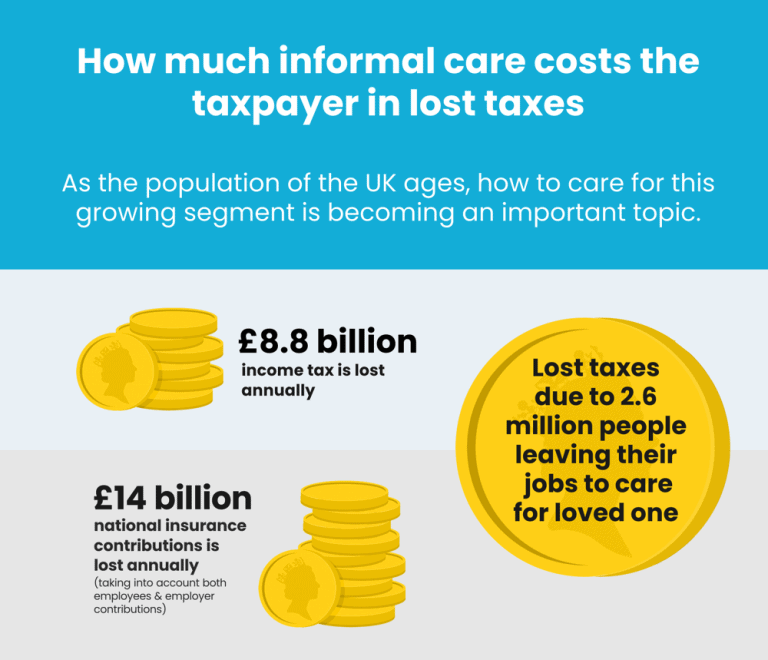 People giving up their jobs to care for a loved one is costing taxpayers nearly £23 billion a year in lost taxes and national insurance contributions, according to new research.

The Live in Care Company, a national agency for live-in and visiting carers, has reported that people leaving their jobs to care for loved ones is costing the public purse nearly £23 billion a year in lost income taxes and national insurance contributions, based on the average national salary.

According to The Live in Care Company’s research, £14 billion is lost annually in national insurance contributions (taking into account both employees and employer contributions) from those who have stopped work to become a carer for a loved one. Furthermore, £8.8 billion in income tax is lost annually for the same reason.

In 2016/17, the UK government spent £21.2 billion (Institute of Fiscal Studies & The Health foundation) on adult social care, which is down 9.9 percent from 2009/10. As spending on adult care fell, the number of people leaving work to care for others has risen by 12 percent, according to Carers UK and YouGov.

Dr Neil Parrett, Co-Founder of The Live in Care Company, said: “The crisis in the adult and elderly care sector means that more and more people are having to quit their jobs in order to effectively care for a loved one who is elderly, in poor health, has a disability, or those who have started to show signs of dementia or Alzheimer’s.

“With nearly three in five carers in England and Wales aged over 50, many of those people giving up their jobs are in the prime of their careers and this is having an impact on not just the individuals who are forced to leave the world of work, but also the public purse.

“We need to rethink how society responds to an aging population. There is a need for flexible, affordable care, so the relatives of those who need care can continue to work. These lost taxes could go some way to help pay for better and more affordable care for the elderly and disabled.

“By helping to better fund home care, which is usually cheaper than using care homes, the government can help not only those who are forced to leave their job, but also help to combat loneliness and isolation for those receiving the care and help them to keep as much independence as possible. This all leads to a healthier care environment, where society benefits overall.”

The Live in Care Company is a home care agency that connects self-employed carers with those looking for flexible home care. Its mission is to give both clients and professional carers a better deal by giving them more autonomy and flexibility, both in the service they receive and the service they give.