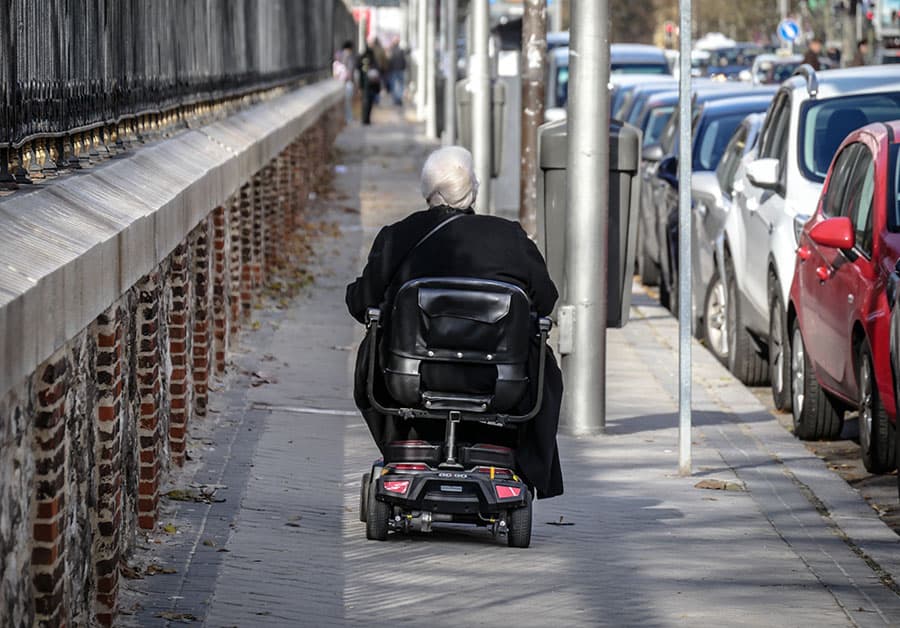 Three new proposals are being reviewed by the UK Government that aim to tackle pavement parking in England to make paths more accessible for elderly and disabled people as well as those with reduced mobility.

A controversial issue, pavement parking can force people with mobility issues to have to perform dangerous manoeuvres to pass obstructing vehicles on paths, such as detouring into busy roads.

According to the Department for Transport (DfT), parking on pavements disproportionately affects people with visual or mobility impairments, those assisted by guide dogs, and wheelchair and mobility scooter users.

A major problem for wheelchair users and those with vision impairments

Recent research from the charity Guide Dogs shows that around one-third of people with vision impairments and almost half of wheelchair users were less willing to go out on their own because of pavement parking, decreasing independence and contributing towards isolation.

Strikingly, more than 95 per cent of wheelchair users and people with visual impairments say they had problems with vehicles parked on pavements.

The current rules in England

It is currently an offence to cause an unnecessary obstruction on the highway, which is enforceable by the police.

Currently, there is only an enforceable blanket pavement parking ban in London as well as targeted no-pavement parking zones established by local authorities across England.

The issue of pavement parking has been in the spotlight recently, however, following an inquiry into pavement parking by a Transport Committee in 2019, along with Scotland’s decision to introduce a blanket ban in 2019 – set to come into effect in 2021.

Announced on 31 August 2020, DfT has launched a consultation, setting out three proposals to make England’s pavement’s more accessible to those with mobility needs by banning antisocial parking.

The consultation is considering: Improving the traffic regulation order process, making it easier for councils to prohibit pavement parking in their areas; giving councils powers to fine drivers who park on paths; and a London-style, nationwide blanket ban on pavement parking.

“Parking on pavements means wheelchair users, visually impaired people and parents with pushchairs can be forced into the road, which is not only dangerous but discourages people from making journeys,” commented Transport Secretary Grant Shapps.

“A key part of our green, post-COVID recovery will be encouraging more people to choose active travel, such as walking, so it is vital that we make the nation’s pavements accessible for everyone.”

The consultation and proposed plans under review have been welcomed by charities, campaigning groups and local authorities, who have fought for a change in pavement policy for years.

Responding to the launch of pavement parking consultation, Cllr David Renard, the Local Government Association’s transport spokesman, said: “Pavement parking and damaged pavements is one of the biggest complaints from pedestrians – and not just in London.

“The LGA has long called for the ban on pavement parking to be extended to all areas of England, with councils able to make exemptions, so we are pleased government has launched this consultation.

“Councils share the Government’s aim to promote active travel and this measure should make walking more attractive and safer for everyone, including vulnerable users.”

Stressing the importance of a ban, Stephen Edwards, Director of Policy and Communications at Living Streets, said: “We’re regularly contacted by disabled and older people who feel trapped in their homes because there is not enough room on the pavement for wheelchairs or mobility scooters.

“This has impacted more people during the pandemic with blocked pavements affecting everyone’s ability to physically distance.”

Alongside the consultation announcement, the government highlighted that any future plans need to take into consideration the major role of cars and other private vehicles.

In particular, DfT pointed to the many streets-built decades and centuries before the high levels of vehicles currently on roads, alongside the need to keep roads accessible for emergency service vehicles.

According to the department, the consultation is the latest step in the government’s pledge to deliver on commitments to make transport equally accessible for all users by 2030, as set out in the Inclusive Transport Strategy.

Highlighting the challenges facing bans to pavement parking, Natalie Chapman, Head of Urban Policy at Logistics UK, commented: “Logistics UK’s members agree that pavements are for pedestrian use first and foremost – their safety and access must come first – and this is particularly important for vulnerable groups such as wheelchair and pushchair users and for the blind and partially sighted.

“But we must also ensure the government considers the needs of logistics in its decision making to ensure that goods can keep moving efficiently and effectively through our towns and cities.

“For example, the government must ensure a pavement parking ban does not further narrow residential streets where cars currently park partially on the pavement, as it could prevent access for refuse collection vehicles, home deliveries and emergency services.

“In addition, there will be occasions where commercial vehicles need temporary pavement access for loading or unloading goods to prevent blocking the road to passing traffic. We will be submitting a response to the consultation to ensure the government’s strategy takes these situations into account and puts appropriate exemptions in place.”

The government announced £2 billion in May to get more people walking and cycling, and £2.5 billion in the Budget towards repairing potholes as part of the biggest nationwide programme ever announced.