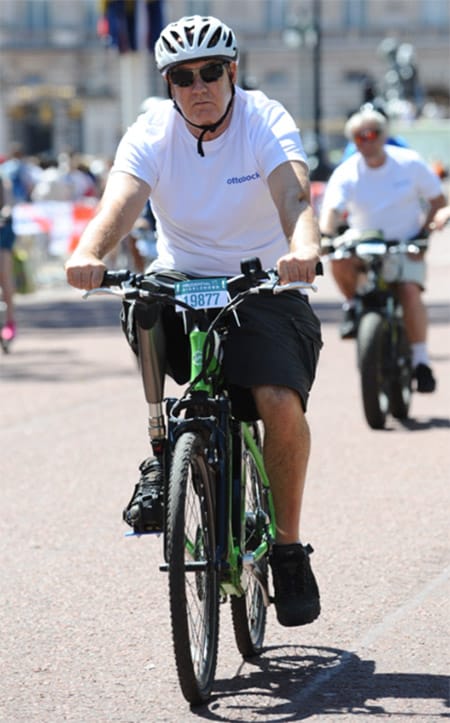 Courtenay Humphreys, a former police officer who lost his leg above the knee in a motorcycle accident, has been using an electrified mountain bike and an Ottobock C-Leg to take part in the world’s biggest cycling festival.

The 61-year-old has been using Ottobock’s microprocessor knee (MPK) technology to enhance his daily life as well as utilised the cycling function on the prosthesis, alongside his electrified bike, to take part in the Prudential RideLondon’s FreeCycle – an eight and a half-mile ride through the streets of London.

Having previously worn a mechanical knee, Courtenay says that his C-Leg – which he got through NHS England’s MPK policy – is much safer, gives him more stability and a more natural gait. It also allows him to spend more quality time with his grandchildren.

As he’s gained more confidence with his C-Leg, he’s become a regular cyclist, enjoying many long rides along the canal which runs close to his Gloucestershire home. So, when the chance to take part in the Prudential RideLondon came around, he signed up straight away.

“It was a wonderful friendly event and an absolute pleasure,” Courtenay commented. “I love cycling – my electric mountain bike helps me with hills and when starting off – and my bike and my leg got lots of attention along the way.

“I had lots of people riding alongside us or before or after the event coming over to ask questions and take a closer look. I think they were amazed at the technology!”

Launched in 1997 and in its fourth and most advanced incarnation, the C-Leg 4 aims to give people independence. It features a variety of options such as real-time swing and stance phase control as well as strengthened stumble recovery support.

Additionally, the prosthesis’ new intuitive stance function recognises when the person has stopped and dampens the knee in a flexed position to offer stability and comfort. It can also adapt to any walking situation in real-time, from level ground to stairs to uneven surfaces.

Founded in the UK in 1976, Ottobock specialises in innovative and practical solutions with a mission of restoring mobility and giving people independence. It manufacturers a wide range of products, including prosthetic and orthotic components, wheelchairs and rehabilitation products.