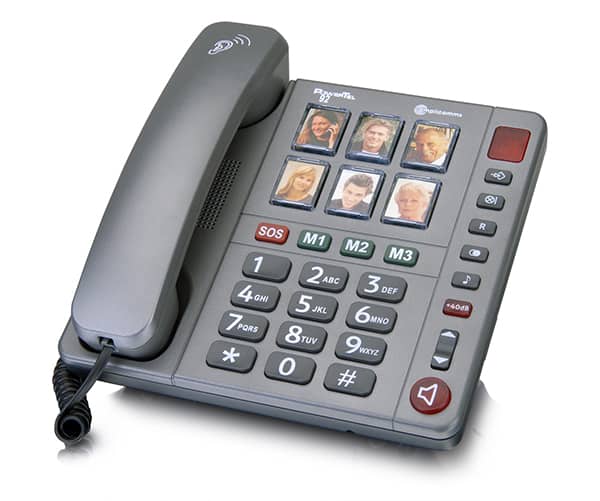 The phone for people with conditions such as vision or hearing loss, reduced dexterity, dementia, Parkinson’s and other motor neuron disorders, the Amplicomms PowerTel 92 makes communicating easier whilst supporting independent living.

Isolation is often a problem for people with poor vision, dexterity problems or those who get confused and forgetful, simply pushing one of the six interchangeable picture buttons is all it takes to contact someone. The photo phone is easy to use with big buttons including a pre-programmable SOS button for emergencies and three direct dial buttons. The phone has hands free Speakerphone option too – vital for someone with dexterity problems.

Created for all levels of hearing loss the PowerTel 92 amplifies calls by up to 40dB making them 100 times louder than regular calls and, a ring tone as loud as a pneumatic drill at 90dB’s, it is difficult for users to miss calls. The phone has premium compatibility with T Coil Hearing Aids without causing interference whilst the flashing red light will also send a signal that a call is incoming.

The PowerTel 92 is the first phone with 40dB amplification that only requires a phone line connection, and doesn’t need mains power, giving huge flexibility of where the phone may be located.

The simplicity of the PowerTel 92’s features, its amplified volume and enhanced sound quality, helps those who struggle with standard phones to connect quickly with others.

The phone retails at £54.99 is available at www.hearingdirect.com