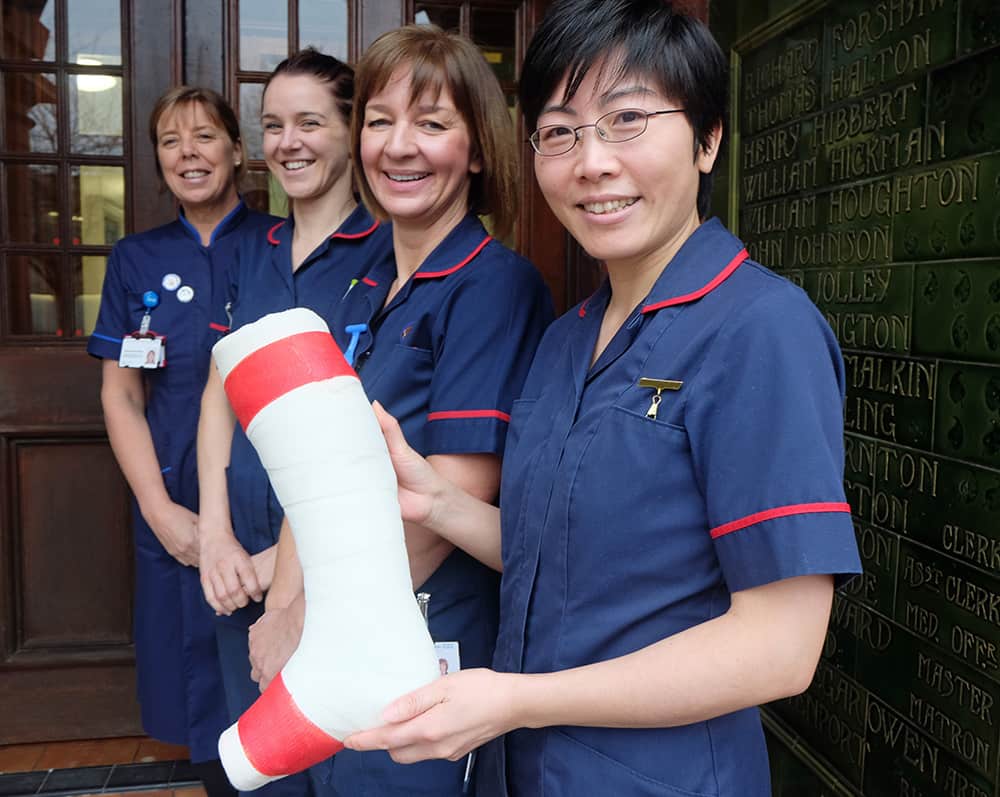 “We put a range of actions in place that would help stop these pressure ulcers developing. The red band on the casts has been a major part of this.”

Staff at Warrington and Halton Hospitals NHS Foundation Trust have eliminated hospital pressure ulcers caused by devices like plaster casts this year with the help of a simple red stripe.

Pressure ulcers can be caused by plaster casts, splints and other devices when they rub against the skin or when a patient can’t be mobile whilst wearing the device for a prolonged period of time. In 2014-2015 the trust saw six cases of severe device-related pressure ulcers so a group of staff got together to design some actions that they felt could eliminate all cases in the future.

One of the key actions has been the addition of a simple red band around all plaster casts worn by patients at greater risk of developing a pressure ulcer.

The simple idea is a visual highlight to staff that extra care needs to be taken with the patient and encourages staff to frequently change the patient’s position, encourage them to be mobile and relieve pressure on the cast.

The red banded cast has been backed up by extra training and awareness for staff. The results of the work have meant that there hasn’t been a single device related pressure ulcer amongst hospital patients since it was introduced at Warrington Hospital and Halton General Hospital in June last year.

The scheme has also been showcased by senior NHS opinion formers as an idea worth sharing across the health service. It could potentially save hundreds of patients from developing pressure ulcers across the NHS each year.

“We’re committed to reducing pressure ulcers across our hospitals, “ explained Rachael Browning, associate director of nursing for scheduled care at Warrington and Halton Hospitals NHS Foundation Trust, “We identified that there was an increased risk caused by plaster of paris and other splints and supports that we use in the hospitals. Whilst those devices are needed to treat fractures and other injuries, it was creating problems for some less mobile patients by causing potential harm through pressure ulcers.

“We put a range of actions in place that would help stop these pressure ulcers developing. The red band on the casts has been a major part of this. It’s a simple idea that is making a real difference. By clearly highlighting the patients at high risk we have seen this fantastic reduction in cast related pressure ulcers. We have seen a really positive result from this initiative in the hospital and we are hoping to cascade the learning and the red striped cast into the community. That’s great for patients and staff alike.”

The initiative has not only made a difference to the quality of care that patients receive, it has also been completely cost neutral for the hospitals. Staff are now sharing their success and ideas with other NHS organisations to spread the best practice developed at Warrington and Halton Hospitals.