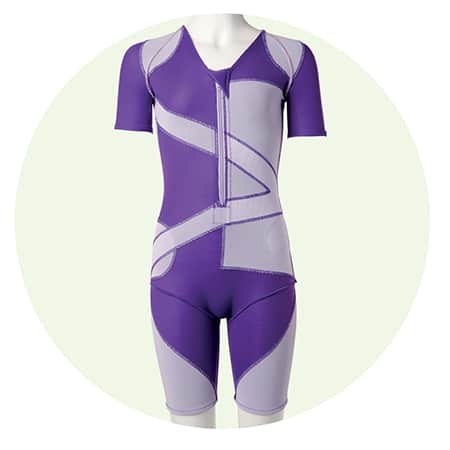 A revolutionary material and innovative suit is providing young people living with curvature of the spine with new hope. A recent study is helping British medical manufacturer, DM Orthotics, discover the clinical benefits of its pioneering product, the Postural Scoliosis Suit.

Developed for young people who suffer with scoliosis, the fabric ‘superhero’ suit helps patients avoid radical surgery whilst also freeing them from rigid bracing. Scoliosis is the abnormal twisting and curvature of the spine that affects a person’s appearance by pulling the ribcage out of position and may also cause a lump to form on the back. Other possible signs include a shoulder blade that sticks out or an uneven waist.

New research published in “Scoliosis and Spinal Disorders Journal” is now providing GPs and musculoskeletal consultants with evidence into the positive effects of the Dynamic Elastomeric Fabric Orthoses (DEFO) for the management of scoliosis in children – specifically those who are affected because of a neuromuscular condition, such as muscular dystrophy or cerebral palsy.

Scoliosis affects around 42,000 young people (aged 15 and under) in the UK, resulting in 3 to 4 children per 1,000 who require specialist supervision. In most cases, the cause is unknown.

The new study, which looked at the clinical notes of 180 young patients, highlights that 42% of children who had been diagnosed with scoliosis and prescribed a DEFO saw their condition improve or not progress further. 12% of scoliosis patients were also found to no longer need any intervention after an average period of 18 months.

Only a third of cases who were prescribed rigid bracing continued to use it, with 11% converting to using a DEFO.

It was also shown that early intervention using DEFO could also have a positive financial benefit to the NHS and privately funded healthcare, with the cost of surgical intervention for neuromuscular scoliosis estimated around £32,000. By contrast, DEFO costs a fraction of the price.

Teddy Hazells, a child suffering from scoliosis caused by hyptonia, was determined to stay at a mainstream school and was fitted with a rigid back brace from a young age.

His mother Marie commented: “He didn’t like wearing it; it was uncomfortable and simply something he knew would have to put up with. It did the job – it literally ‘propped him up’. But I was determined that as he grew up I would find him an alternative; something that would support him and stop the scoliosis from getting worse.”

Marie’s search led her to DM Orthotics and with the support and advice of her physio and Teddy’s spinal surgeon, Teddy made the transition to wearing the DMO Suit.

Marie continued: “Just a year in and we still cannot believe the difference the suit has made to Teddy’s quality of life. Straight away we noticed he was happier, more comfortable, full of confidence and had so much more energy and concentration.

“We are so pleased that his ability to walk and sit up comfortably has improved so much – as well as the fact he can now enjoy swimming, whilst still wearing his brightly coloured support suit in the water.”

The suit is designed with young children in mind, with details such as colours and even stitching being able to be chosen by the child themselves – and can comfortably be worn under school uniform.

Lead author and Managing Director of DM Orthotics, Martin Matthews, comments: “There is little doubt that our study has produced some very interesting results, putting forward strong evidence for the wider use of DEFO’s in the management and prevention of neuropathic onset scoliosis in children and as a positive alternative to rigid bracing and invasive surgery.”

To find out more about DM Orthotics and the suit, visit the website HERE