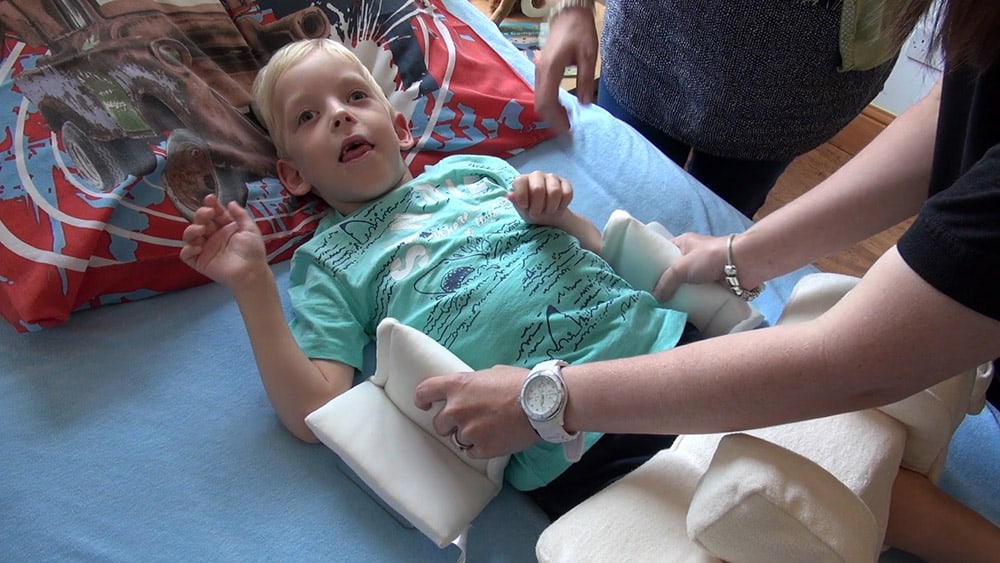 7-year-old Charlie Hall is one of a growing number of children in the UK benefitting from a good night’s sleep thanks to the Positioning System from Simple Stuff Works.

Charlie and his twin brother Evan were born at 32 weeks and Charlie was diagnosed with Cerebral Palsy at seven months, probably as a result of Twin to Twin Transfusion Syndrome. Charlie has quadriplegic cerebral palsy, affecting all of his limbs and leaving him unable to stand, walk or sit unsupported. On a daily basis, Charlie needs help with everything from eating and drinking to being changed and dressed.

“Since he was born, Charlie has been a poor sleeper and it is not uncommon for myself or his father to be up every hour to move him and make him comfortable. While it was adequate, Charlie’s original sleep system was not easy to transport and was far from discreet” explained his mother, Olivia.

It was at the Kids Up North show that the family discovered Simple Stuff Works and was introduced to a solution that would truly help Charlie sleep.“The Positioning System from Simple Stuff Works is just fantastic. Not only is it more discreet, but we can take parts of it with us when we go away and as any parent of a child with disabilities will know, the amount of equipment you have to travel with can be enormous”, continued Olivia.

“The Positioning System from Simple Stuff Works is just fantastic. Not only is it more discreet, but we can take parts of it with us when we go away and as any parent of a child with disabilities will know, the amount of equipment you have to travel with can be enormous” continued Olivia.

From Charlie’s perspective, the system is far more comfortable than his previous system and allows his bed to look normal, which Charlie’s parents feel is very important as he has so much other equipment in his room.

The Simple Stuff Works Positioning System has been designed to offer a comfortable, hygienic and safe to use solution whilst helping people of all ages maintain a position that reduces the risk of body shape distortion. This is vitally important for someone like Charlie who has strong extensions and spasms, therefore maintaining his body shape as he grows will help prevent numerous additional surgical procedures and further discomfort. For those like Charlie, the Positioning System is part of a 24-hour postural management plan. 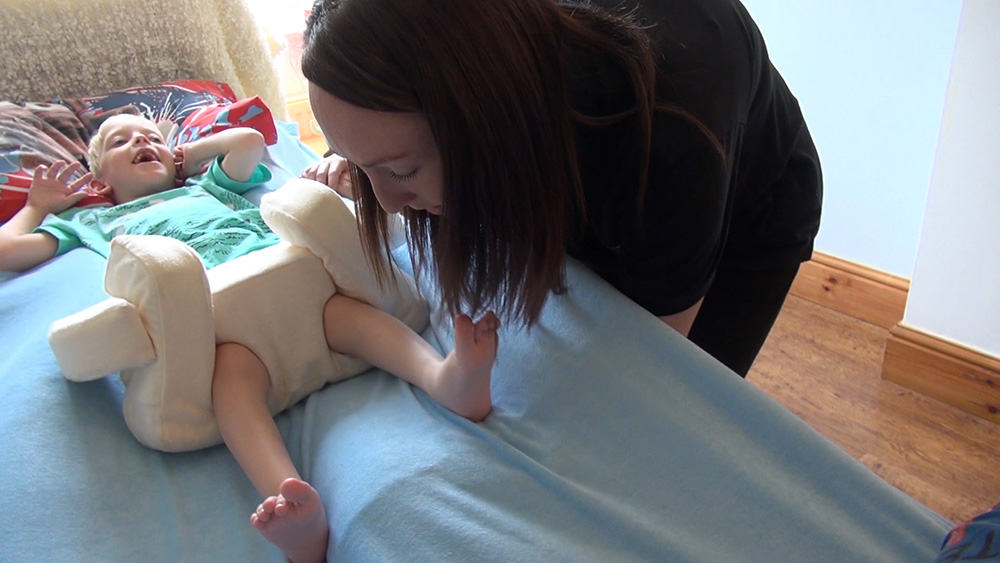 “It is so rewarding to see how children such as Charlie are benefitting from our equipment. For Charlie, our positioning system will help him to remain comfortable and supported for long periods of time as his body grows. By using the equipment at night he can hope to protect his body from otherwise predictable secondary complications, such as scoliosis and hip dislocations,  allowing him to get a more rested night. Hopefully, this will help the family to get a better night’s sleep too! It’s wonderful to see Charlie so comfortable and relaxed” commented Anna Waugh.

The base of the system comprises two layers of non-slip mesh between which supports are placed around the individual. The supports can be lateral supports, wedges, pillows or teddy bears, ensuring that this Positioning System is the most versatile solution available and as there is no noise, there is a greatly reduced chance of the user being disturbed during the night. Hygiene is of paramount importance when using a sleeping system and the Positioning System from Simple Stuff Works contains silver which has been proven to actively combat communicable diseases such as MRSA, Salmonella and E-Coli through the application of SteriTouch. SteriTouch is made up of a range of antimicrobial additives which reduce the growth of harmful organisms including bacteria, mould and fungi.

Simple Stuff Works is an award winning organisation. The Positioning System won the British Healthcare Trade Association Independent Living Design Award in 2011 for its simplicity and ease of use. In the last 12 months Simple Stuff Works has gone on to win the British Healthcare Trades Association Best Established Product Award in 2015, the Tamworth Business Awards 2015 for Manufacturer of the Year and the company is currently shortlisted as a finalist in the Staffordshire Chambers and Commerce Business Awards 2016 in the International Trade category.