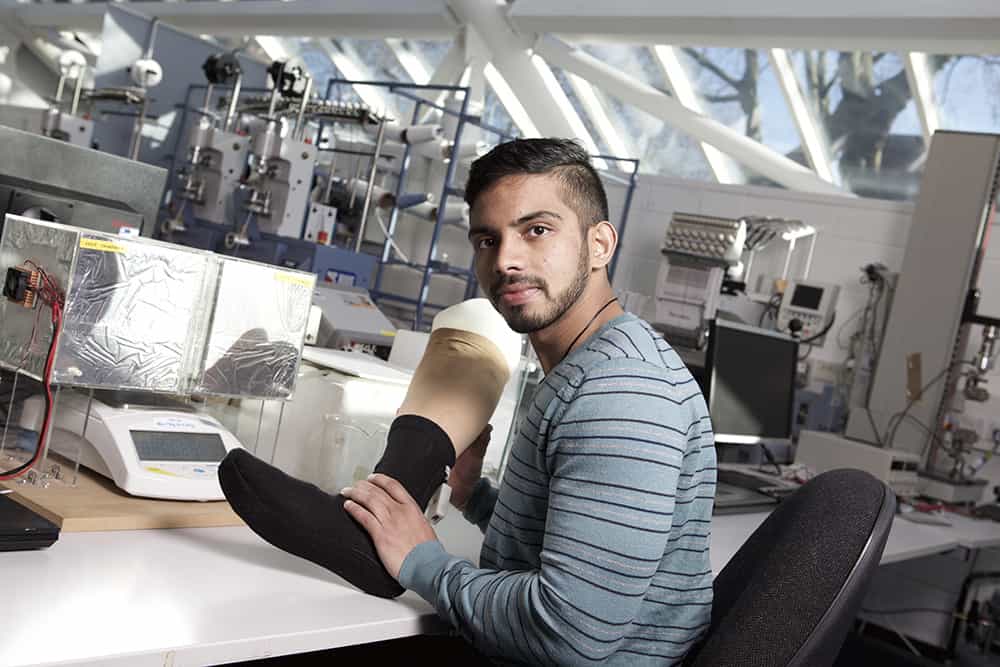 “Clinical trials have shown that temperature monitoring can prevent diabetic foot ulcers up to 72 per cent.”

Doctors will be able to remotely monitor diabetic people for a potentially life threatening condition thanks to the development of socks which measure foot temperature.

Research by Nottingham Trent University, in collaboration with Copenhagen/San Francisco-based Siren Care, has led to the development of electronic smart socks which inform users of the early signs of diabetic foot ulcers.

The technology, developed by a team led by Professor Tilak Dias, from the university’s School of Art & Design, can continuously measure the temperature of a patient’s feet and relay the data live to the accompanying Siren app.

The aim is to give advanced warning of when users may be about to develop an ulcer, allowing them to prevent the onset of the ulcer and learn to adjust their behaviour based on the feedback.

Professor Dias, who leads the university’s Advanced Textiles Research Group, said: “It’s essential that diabetic foot ulcers are identified and treated as quickly as possible before they increasingly damage a person’s health.

“By combining electronic sensors with fibres in a yarn, we’re able to spot the first signs of ulcers remotely, giving advanced warning of when they occur and potentially helping sufferers avoid the development of a very serious condition.” 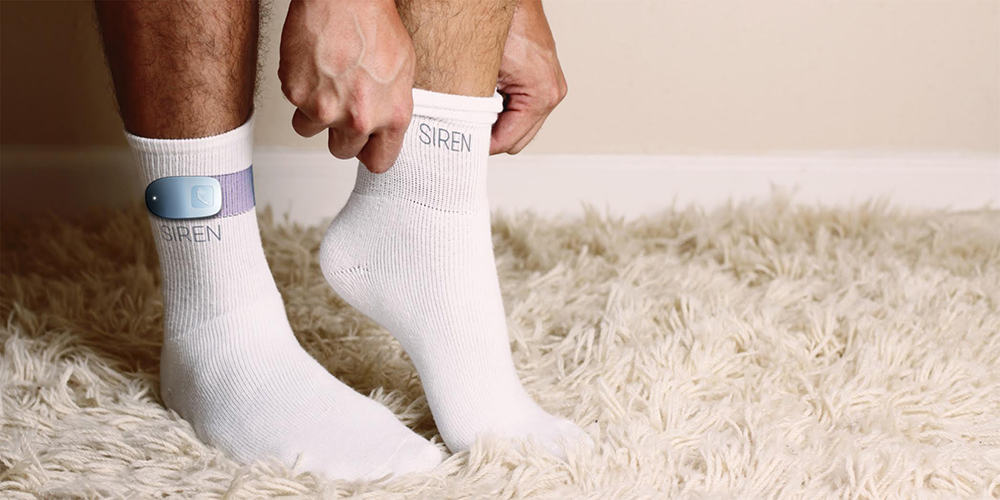 People with diabetes can have reduced nerve function due to peripheral diabetic neuropathy, putting them at increased risk to frequent and often severe foot problems with a relatively high risk of infection, gangrene and amputation. A temperature difference between the two feet can be one of the first signs of an ulcer forming.

The Siren Smart Sock System works by measuring temperature with thermistors that are less than a third of a millimetre long. Encapsulated in water-resistant resin pods, they are embedded into the yarns of the socks and are too tiny to be felt by the wearer.

Connected by conductive filaments to a custom-made Bluetooth device developed by Siren Care, the socks communicate the temperature data via the patient’s smartphone to a doctor’s computer.

Ran Ma, chief executive officer of Siren Care, said: “Foot ulcers are especially dangerous to diabetics due to the nerve damage and circulation problems that diabetics often suffer from.

“Not only are diabetics unable to feel when they have damaged their feet, this damage can become severe due to the inability of the wound to heal, leading to a limb lost to diabetes every 30 seconds around the world.

“Clinical trials have shown that temperature monitoring can prevent diabetic foot ulcers up to 72 per cent. A temperature sensing sock, which will provide the diabetic patient and their support structure with early warning system for foot ulcers, is easy to use and will fit seamlessly into their lives.”

Researcher Pasindu Lugoda, who developed the temperature sensor technology as part of his PhD, said: “What’s special about our design is that the socks are fully washable and wearable. For all intents and purposes, it’s like you’re wearing an ordinary pair of socks. But in actual fact you’re wearing a sophisticated piece of technology which is monitoring your health and relaying live information to your doctor.”