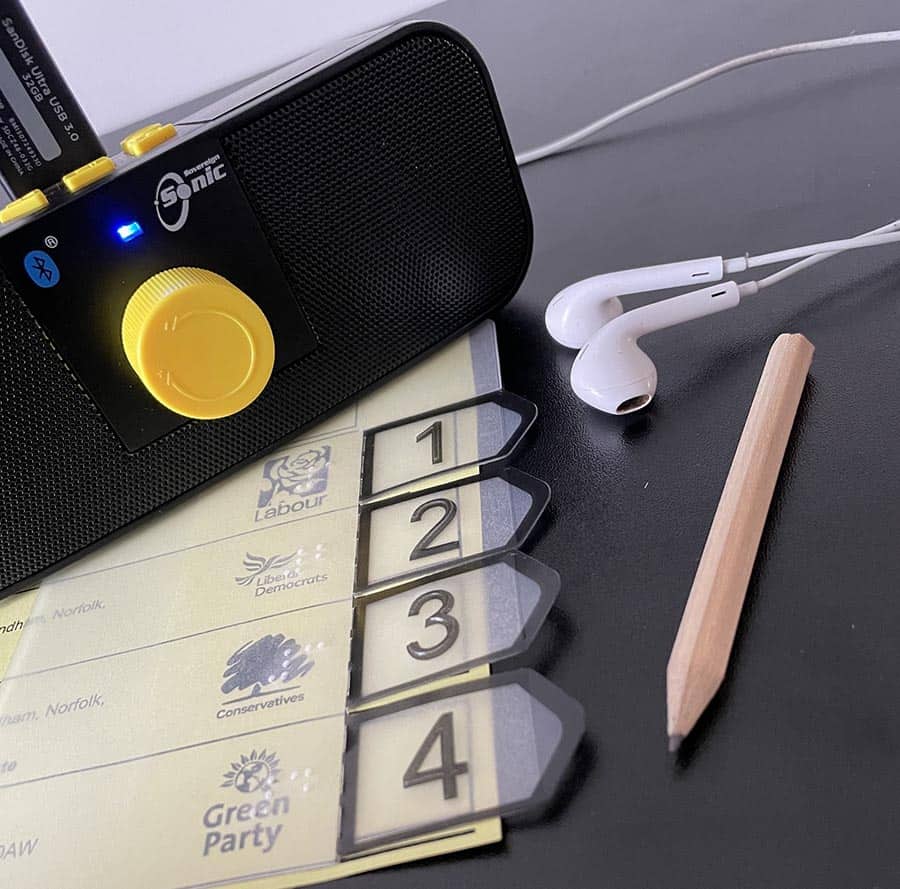 This week, blind people in Norfolk will be taking part in a trial that could see them vote without needing support for the first time.

The Royal National Institute of Blind People (RNIB), the Cabinet Office, and Broadland and South Norfolk district councils have been working together to arrange the trial, which will act as proof of concept for a new audio device that can tell listeners the order of the candidates on a ballot paper.

Currently, blind voters need a polling staff member or sighted companion to read out the candidates so that they can cast their vote with a Tactile Voting Device (TVD), a plastic sheet that attaches to the form and shows where marks should be made. However, this means that they are unable to vote independently or in private – a fact which meant that the TVD was declared unlawful in May 2019 in a legal case brought by Norfolk campaigner Rachael Andrews.

RNIB Policy and Campaigns Officer Mike Wordingham said: “Our research shows that just one in every ten blind voters were able to vote independently and in private in the 2019 General Election. That means that thousands of people like me are still not able to exercise our fundamental human right to vote with any degree of secrecy, which undermines the entire voting process.

“By using this new audio device alongside the TVD, locals taking part in this ground-breaking trial will be able to hear for themselves who is on the ballot paper and vote without assistance from others.

“We will be monitoring feedback from the trial very closely, but we are cautiously optimistic that the audio device could be a game-changer in voting for blind and partially sighted people. Everyone should have the right to cast their vote in secret – blind and partially sighted people should be no different. Hopefully, this device will be a good first step in the right direction.”

The trial will run across nine polling stations in Broadland and South Norfolk Districts Sprowston, Woodside and Wymondham and, if successful, the audio device could be rolled out across the rest of England in future elections.