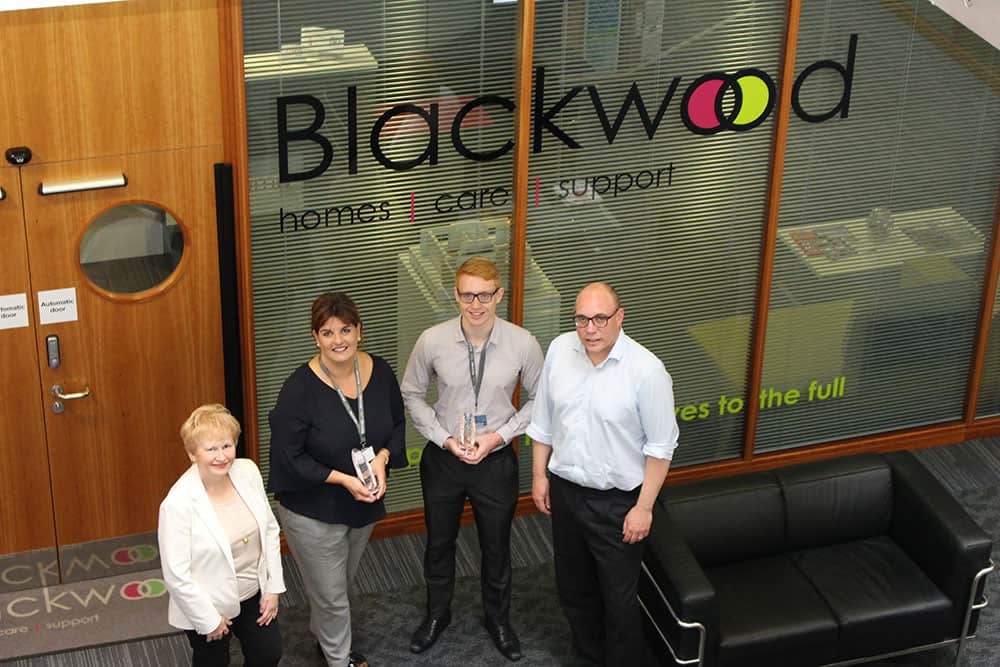 The winners of one of the housing and care industry’s most esteemed design awards, the Blackwood Design Awards, have been presented with their prizes at a ceremony held in Edinburgh.

The Awards celebrate some of the best inventions to help disabled people live life to the full.

After another year of creative entries, Blackwood chose its winners, who have now been given their trophies at a presentation held at Blackwood’s head office in Scotland’s capital.

Sara McDermid from the Dementia Services Development Centre at the University of Stirling collected the award for ‘Best Collaborative Project by a university or institute of higher learning’ for its Iridis app, which helps the user to improve living spaces for those with dementia.

“It’s fantastic to get this recognition and we believe we’ve achieved something really quite special with Iridis and have big plans for it going forward,” she commented. “I think it’s a great example of how universities and businesses can work well together.

“We’re looking to develop a range of products within the Iridis range across a range of sectors including housebuilding so that we can start to future-proof buildings and help people with dementia.”

In addition, the ‘Best New Concept’ category was won by Andrew Taylor with his specially-designed guidance system for visually impaired athletes, which works in a similar way to parking sensors using sound to guide runners around a track.

He said: “It’s amazing to have won this award especially when you consider the quality of the other entrants.

“It’s very much in the prototype stages at the moment but I’m working hard to develop it and make it more robust while developing the technology it uses even further.”

While both Sara and Andrew collected their awards in person, South Korean company Neofect had its award sent out after winning the top prize in both the ‘Best Aids and Equipment’ and ‘Best Accessible Technology’ categories for its RAPAEL Smart Glove and Smart Pegboard, both of which can be used in the rehabilitation and treatment following serious injury or stroke.

Past Award winner Grant Douglas, who created the S’up spoon which helps people with shaky hands to eat, has since seen widespread success after receiving his Award.

This year’s winners collected their prizes before sitting down for lunch to exchange ideas and plans for the future.

Max Brown, Chair of the Blackwood Board, concluded: “It was magnificent to welcome our winners to our head office and celebrate their talents with them.

“No matter how detailed or simplistic the entries to the Blackwood Design Awards are, they make a huge difference in helping those living with disabilities to live more independently, which is why we encourage any budding inventor to enter the competition.

“It’s an incredible way to champion the innovative ideas that designers have and helps to act as a platform for them to go on further and develop their products in the future.”