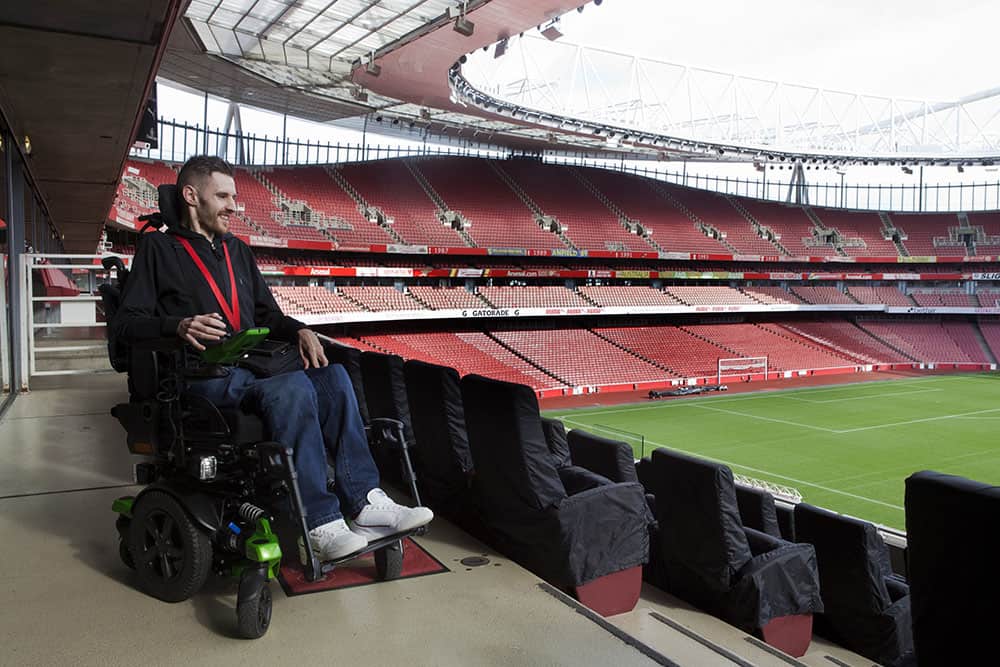 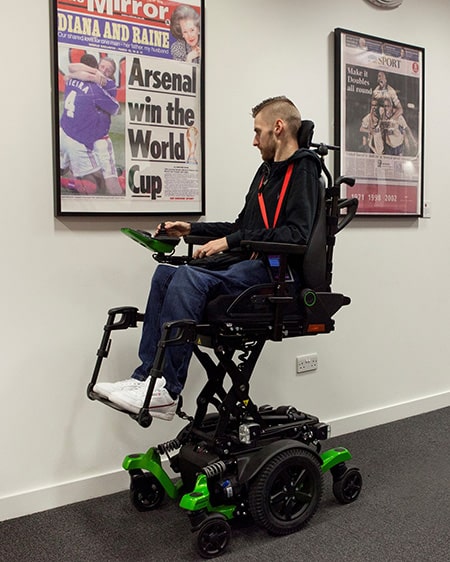 Ottobock invited Jon Bolding, captain of the England powerchair football team, to enjoy a day out test driving Ottobock’s Juvo B5 mid-wheel-drive powerchair and as a life-long Arsenal fan, the company took him to the Emirates Stadium.

Jon, who has a rare muscular condition called central core myopathy, needs a wheelchair most of the time and drives a specially reinforced powerchair for playing his football, both for his club, Aspire PFC in Watford, and for England, for whom he’s been scoring goals for more than six years.

He was an Arsenal season ticket holder until his daughter was born three years ago and now trips to see his beloved side are a special treat. So, it was the perfect place to put the Juvo B5 to the test, as he and his dad, John, took a behind the scenes stadium tour.

Together they got to see the home and away changing rooms, the press conference room and media centre, the directors’ box, the trophy room and museum and finally went pitchside by the hallowed turf.

The Juvo B5 made light work of the tour, navigating tight bends, differing surfaces and small spaces with ease, while for Jon, the day was made even better by a smooth and comfortable driving experience.

He said: “It’s really smooth and because it’s a mid-wheel-drive you can manoeuvre in and out of tight obstacles. You have to get used to it first but once you do it’s really easy to control.

“The comfort is really important to me, obviously you don’t want to drive around in an uncomfortable chair.

“With the tilt, to be able to tilt forward or backwards depending on your scenario is really handy, and the riser allows me to see different views of things and access things that maybe I couldn’t have done before.”

After the tour and some retail therapy in the club shop, Jon and his dad made their way to one of the most popular club pubs, the Tollington Arms, for a well-earned drink and some lunch.

“I’m an Arsenal fan so this day has been a dream really, and to go around in this chair, with the comfort that it brings, has given it that extra special feel,” he said.

Jon thanked Ottobock for inviting him to trial the Juvo B5 and added: “And thanks to Arsenal for putting everything in place and allowing wheelchair users and manual wheelchair users the opportunity to experience this.

“The tour has been so accessible, I’ve been able to experience every part of it. There’s been no stairs, or anything out of my reach. It’s been a really brilliant day.”