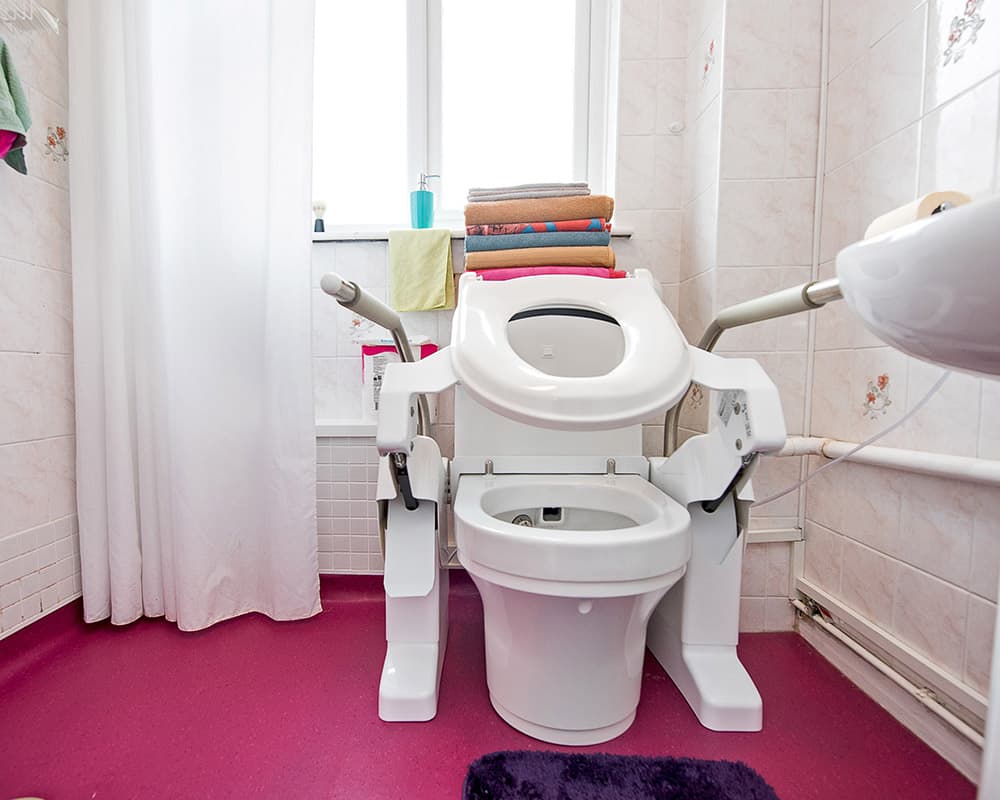 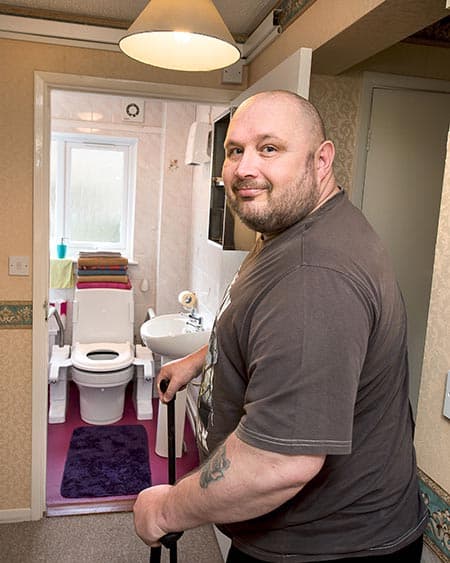 Rob Cain has peripheral neuropathy, inflammatory bowel disease, fibromyalgia and arthritis, which, as a result, leaves the 50-year-old with little mobility and little feeling in his hands. This is a cause for concern for his two young daughters, who worry about how he copes as well as his safety when they are not around.

Initially, Rob was provided with a commode. Despite different seats, frames and handrails, his impairments meant he kept falling when transferring, particularly when reaching for his walking sticks.

However, he then installed a Closomat Palma Vita shower (wash & dry) toilet as well as an Aerolet Tilt toilet liftover into his wetroom, which allows him to go to the toilet whenever he wants without help, while remaining safe and dignified.

“I’ve not fallen once when going to the toilet since I’ve had the Closomat kit,” commented Rob. “Yet I didn’t even know there was such a thing as a Closomat until about six months ago.

“Now I can go to the toilet safely, with dignity. The psychological impact on my mental health is amazing!”

The Closomat Palma Vita looks like, and can be used as, a conventional toilet with integrated douching and drying which removes the need for manual cleansing.

Additionally, Closomat’s Aerolet toilet lifter replaces the natural motion of sitting down and standing up as it supports and balances the user while automatically lowering and raising them over the toilet.

Rob continued: “It’s given my girls peace of mind. They really worry about me, and like to know Daddy is being looked after. They are my heart and soul, so it’s good to be able to give them reassurance.

“It’s something you take for granted, going to the toilet, yet everyone needs to do it. My girls use it as a normal toilet. I of course use the douching and drying: I have little feeling in my hands so it is difficult to clean myself.

“Now I have the peace of mind that I am clean which is particularly an issue with my IBD.”

Closomat’s Palma Vita shower toilet is the only one of its kind manufactured in the UK and can be accessorised initially or retrospectively if the user’s needs change.

The Aerolet offers both a tilting and vertical version in a toilet lifter: the vertical is best suited for people with limited lower body and limb strength, whereas the tilt suits people with control over their legs.

accessible toileting, arthritis, Closomat, Closomat Aerolet Tilt, Closomat Palma Vita, healthcare sector, mobility needs, toileting aid
« Charity looks to take action against Dudley CCG due to vital equipment not being given to those in need
Ottobock C-Leg helps woman get back to her best »