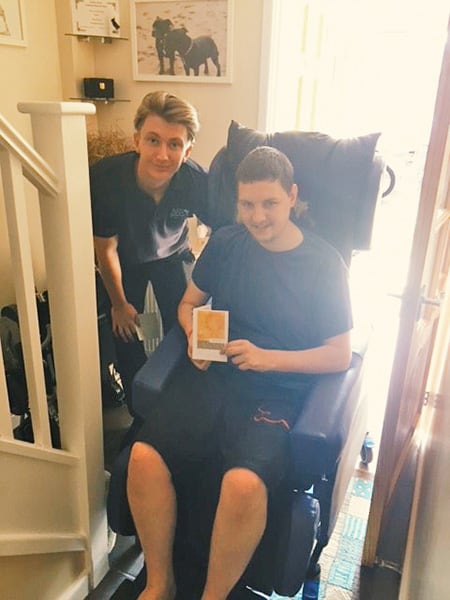 NRS Healthcare has given a high dependency chair to a young man living with Motor Neurone Disease, free of charge, after discovering he had been on an NHS waiting list for the past 2 years.

Rob, who has spent the last 2 years hoping that the NHS would provide him with a new chair, was thrilled with NRS’ gift and made sure to write a thank you to the company.

NRS Healthcare’s team first met Rob during the 2017 Disability Awareness Day (DAD) event hosted by Warrington Disability Partnership. NRS was giving away free Kura Care Cutlery sets at the event and Rob had visited the stand to pick one up.

Steve Kennedy, Commercial Director at NRS Healthcare, explained: “After taking home a set of Kura Care Cutlery from our stand at DAD in 2017, Rob returned this year to let us know that the cutlery had enabled him to eat independently for the very first time and he wanted to thank us for his invaluable freebie.

“Of course, we were thrilled and spent some time talking to Rob about his health condition to better understand what everyday life was like for him.”

Rob opened up to Steve about how he had spent the last 2 years waiting for a high dependency chair to help him move around more independently, and was still on the NHS waiting list.

“It was hard for our team to hear about the daily challenges Rob faced and not do something about it,” Steve said. “So, after the DAD event, I selected a high dependency chair from our warehouse in Preston and delivered it, using one of our vans, to Rob’s home in Runcorn – with our compliments.”

After receiving his new chair, Rob couldn’t thank the team at NRS enough and handed over a note which emphasised just how big a difference it will make to his independence.

“We are thrilled to have helped Rob grow his independence by offering him this new high dependency chair,” Steve concluded. “It feels good to make a real difference to someone’s everyday routine and we hope Rob will keep in touch to let us know how he is getting along.”

A BHTA member, NRS Healthcare is a provider of daily living aids and community equipment. The website for the company is here.