The Voice Selector Converse helps overcome challenging hearing situations for those who struggle to hear in busy environments, known as the ‘cocktail party problem’. It offers a technology solution to help understand conversations in a crowded room, without the need for hearing aids.

Worn around the neck or placed on a table, connected to headphones via low latency protocol Bluetooth, the Voice Selector Converse has unique auto-steering technology, which picks up the dominant speaker, even when they are moving about. Alternatively, the user can manually switch between speakers when conversing with a group.

Using beamforming technology, built-in microphones and an advanced algorithm to track the source of sounds, the Voice Selector Converse allows the user to easily focus on a conversation and tune out background noise.

It also captures, processes, and plays audio at a record speed of 0.006 seconds a multifunctional device and can be used as a table microphone or remote microphone which is helpful for most scenarios where background noise can be an issue. 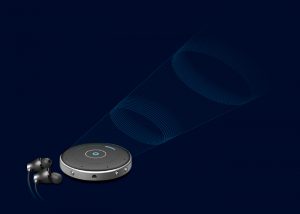 According to Nuance Hearing, during audiology testing, users were able to understand speech on average three times better than without the device.

Ori Goren, CEO of Nuance Hearing, said: “Since 2015, we have been delivering powerful and advanced hearing solutions that deliver optimum performance.

“We know that many people in the UK are suffering in silence, unable to feel comfortable or enjoy conversing in busy environments, and are proud to have launched an innovative tech solution to help combat this.

“Through innovative technological solutions, we are passionate about improving the quality of life for a diverse group of people, making every environment more accessible and helping ensure personal success and empowerment.”

A survey carried out by Opinium, on behalf of Nuance hearing, suggests that 41 percent of all UK adults (around 20.6 million people) admit to having the ‘cocktail party problem’, struggling to understand speech in a noisy environment.

Hearing loss currently affects 12 million people in the UK. The World Health Organisation estimates that one in five one in five people worldwide live with hearing loss, expected to rise to one in four by 2050.

Unaddressed hearing loss can have a devastating impact on people’s ability to communicate, study and earn a living, Nuance Hearing underlines.

On average, people wait ten years before getting help for hearing loss, as found in a report by the Royal National Institute for Deaf People (RNID). The ‘cocktail party problem’ where people have difficulty understanding speech in noisy situations can often be the first sign of a hearing loss.

Franki Oliver, Audiology Specialist at RNID, said: “While it might not seem obvious at first, having difficulty understanding speech in background noise is usually one of the early signs of hearing loss.

“The ‘cocktail party problem’ is the name used to describe the brain’s inability to filter out background noise and tune into what someone is saying in a busy environment. Most people with hearing loss experience difficulty in these situations.

“The sooner hearing loss is identified, the earlier someone can start benefiting from life-changing hearing devices. Hearing loss can also be linked to conditions such as dementia so early intervention is vital.”