Andy McIntosh, 42 from Strathaven near Glasgow, is a disabled Army Corporal who has just achieved a new world record by driving a TGA Breeze mobility scooter from John O’Groats to Land’s End in the shortest time ever. 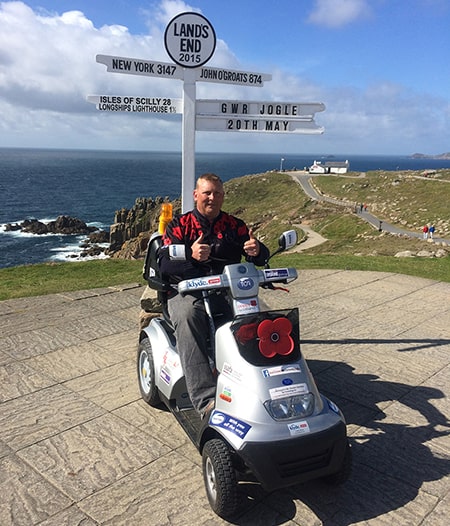 On 20th May 2015, Andy McIntosh achieved the ‘Fastest journey from John O’Groats to Land’s End on an Electric Mobility Vehicle (individual)’ – 1,000 miles in 16 days 8 hours. Pending final ratification by Guinness World Records, this epic achievement by Andy has beaten the current record, which stood at 24 days and 9 hours, by an incredible 8 days 1 hour.

Andy has achieved this new world record to raise donations for several military charities that have supported him including Poppy Scotland, SSAFA, ABF The Soldiers’ Charity, Erskine and Soldiers off the Streets. You can donate HERE.

Andy began this monumental challenge at 8am on the 5th May 2015 when he left John O’Groats driving an 8mph Breeze S4 GT mobility scooter loaned and supported by TGA. Two Klyde Mobility engineers, a Scottish TGA retailer, met Andy in a support vehicle at specific locations along the route for technical check-ups and battery changes. At Gretna Green, a retired Territorial Army friend of Andy’s took over the support role all the way down to Land’s End.

Andy has driven the complete length of Britain first tackling the Scottish Highlands and Cairngorms, down into northwest England, through the Midlands, past the Cotswolds and then finishing in the county of Cornwall. Andy has successfully tackled a huge variety of terrain on his trusty TGA Breeze and experienced extreme weather during several periods of his journey. Andy’s TGA scooter, which is the same model that won BBC TV’s Top Gear extreme mobility scooter challenge, has regularly delivered a remarkable 30 miles on each set of batteries. It has also kept Andy comfortable and safe for extended periods of driving, commonly exceeding eight hours. He has received overwhelming support from locals and drivers throughout his journey and Andy eventually arrived at Land’s End at 15:47pm 20th May 2015.

Originally from Manchester and retiring from the Army fully fit, Andy discovered in 2008 he had a highly rare and inoperable vascular condition. In simplistic terms, Andy’s blood circulation is severely restricted as a large number of his veins and arteries have disintegrated. This has resulted in Andy’s ability to walk being extremely limited, however with the aid of a TGA mobility scooter he has been able to remain mobile and independent.

On completion of this inspirational journey Andy commented: “The last 16 days have been breath-taking for me – I have seen such amazing and varied scenery and met some remarkable people. I can honestly say I have found this challenge so much easier than I thought it would be. Pardon the pun, but it has been a real breeze on my TGA Breeze; my time on the road has gone so quick. I would like to thank everyone who has made this new world record possible especially TGA who loaned me the scooter, Klyde Mobility and my support drivers, Yuasa Batteries and the numerous hotels along the way.”

Andy concludes: “However successful this world record attempt has been, unfortunately donations to my chosen military charities have been low – if you can, please donate on my Just Giving web page – search ‘Andy McIntosh Jogle’. I am already considering my next challenge which will be even more extreme – I hope to tackle the Sahara desert on a TGA mobility scooter with the support of fellow ex-Army veterans!”