Invacare has announced its support of tennis athlete Andy Lapthorne with Küschall and Top End chairs.  The presentation of products took place alongside world veteran tennis ace, friend and mentor Peter Norfolk, OBE at his retail outlet EPC in Farnborough. 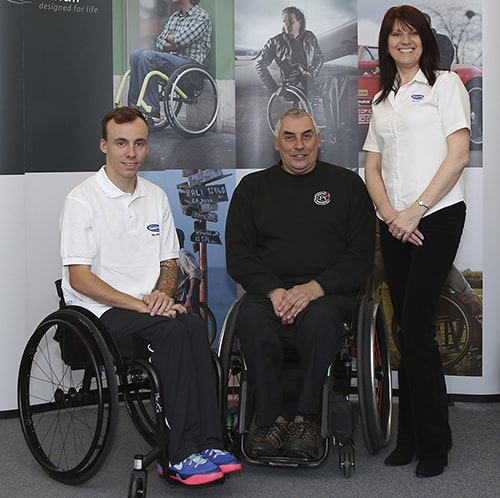 As a successful quad player Andy has already scooped numerous championships with a Silver medal in the Paralympics 2012 and more recently he won the US Open Singles Championships 2014 and the Australian Doubles 2015.

Currently ranked number 3 in the world, Andy has always been a keen sportsman and despite having cerebral palsy he’s always been determined to succeed.  He started playing disability football at the age of 8 and went on to play wheelchair basketball where his talent was recognised and he transferred his skills into tennis.At only 24 and already on the world tennis circuit, the sky is the limit as Andy looks forward to representing Great Britain at the Paralympics in Rio 2016.

Andy was presented with a Küschall KSL and a Top End T5 tennis chair. The chairs will enable Andy to pursue everyday activities and ensure he has the right product to compete at the highest level.

On receiving the chairs, Andy commented; “I’m really pleased with both the Top End T5 and the Küschall KSL. The T5 moves so quickly with minimum effort and turns super quick. And having a new day chair that not only manoeuvres so well in all environments but looks really great too – it just matches my personality and boosts my confidence.”

To learn more about the rising star, visit Andy’s website HERE and find out more about Invacare HERE