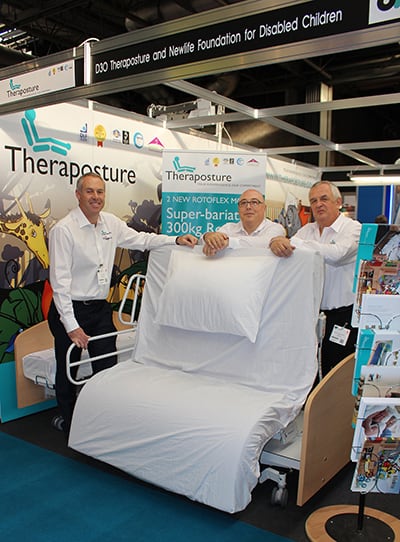 Theraposture has unveiled two new versions of its original Rotoflex turning bed system at the 2015 OT Show – a Super-bariatric and a Low Access version.

The original bariatric Rotoflex has been on the market since 2011 and is suitable for users weighting up to 190kg, however in response to a need from larger clients, the company has introduced an extra heavy-duty version that has a 300kg SWL. This Super-bariatric Rotoflex is the highest user weight capacity turning bed available and can support a user weighing up to 245kg.

According to the company, the variable height functionality is particularly beneficial, allowing the sleeping platform to be raised from 32cm to 82cm above floor level and fully meeting BSEN60601-2-52 regarding safe working heights, along with an ability to avoid any risk of entrapment.

Liam Braddell from Theraposture comments: “The launch of our two new Rotoflex assistive beds at the OT Show has been a resounding success. Both the Super-bariatric and Low Access turning bed systems have generated significant interest from OTs who were keen to understand why our products are so highly regarded.

“Both beds have intuitive controls and we have also just introduced enhanced mattress fixtures to minimise movement when profiling and for easier removal when cleaning.”

To find out more about the new beds, visit the website HERE