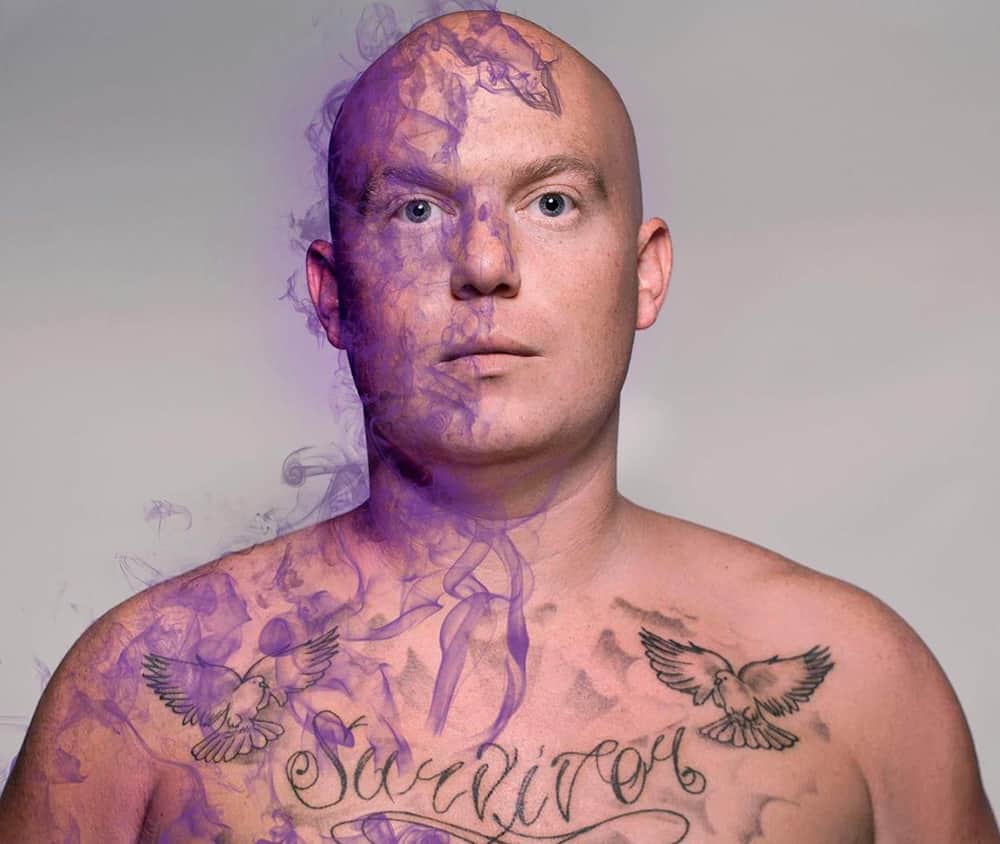 Adam Hayes, a Hospitality Professional from Birmingham, was just 29 when he had a stroke in his bathroom four years ago causing paralysis to the right side of his body, as well as speech and language problems.

Having bent down to put some clothes in the washing basket, Adam’s right arm and hand were suddenly paralysed and when he checked his face in the bathroom mirror he noticed that the right side had drooped. Remembering the Stroke Association’s “ACT F.A.S.T” campaign from the TV, Adam quickly called for an ambulance on his mobile but as the operator picked up, his legs buckled from underneath him and he found himself unable to speak coherently. Luckily, the operator was able to trace the call and paramedics were dispatched to his home, where they found Adam collapsed on the floor.

“I was taken to City Hospital in Nottingham, where I lived at the time, and stayed on the Berman Stroke Unit 1. As I lay there, I noticed all the people around me were much older and some were on their 2nd or 3rd stroke. I saw some people refusing physiotherapy and it was as if they were just giving up. I didn’t want to be like that.”

“I was determined not to quit.”

Although Adam regained the feeling in his face and legs fairly quickly, his right arm remained paralysed for some time. As part of his recovery, Adam’s Occupational Therapist used electrodes to stimulate the nerve endings in his arm and after a number of weeks, when Adam was sat watching TV at home, his hand shocked itself without warning! His brain had started talking to his arm again.

Adam was told that his stroke wasn’t lifestyle related – it had actually been caused by a bleed from an Anterior Venus Malformation (AVM), or “a birthmark on the brain” which had been there all his life. If the “birthmark” was removed, Adam would no longer be at risk of having another stroke.

“Because the “birthmark” was in my Front Left Lobe, it was a very high risk to operate on me, so instead I was transferred to Sheffield, where the medical staff performed specialised non-invasive surgery on me, using a ray gun to pinpoint the part of my brain that was damaged and cut around it. In order to keep my head absolutely still, I had to have a dome-like helmet screwed into my face and I was told I’d have to wear it for 24 hours.”

To date, Adam has personally raised over £6,000 for the Stroke Association through various fundraising events as he firmly believes seeing their “Act F.A.S.T” campaign on TV helped save his life. Taking part in the “Tough Mudder Half” with a group of friends was a particular physical milestone, but he didn’t want all his fundraising to focus on something sport-related.

“Being a Millennial who has experienced stroke means I have a unique opportunity to reach out to an age group which I find are often overlooked by stroke charities, despite research showing that “More Millennials are Having Strokes” I’ve worked in hospitality all my life, and eating out is a massive attraction for Millennials – you only have to look at the #foodporn photos on social media to know that! That’s why I organised a “King of the Wing” eating competition at Hooters, Nottingham – which raised over £2,000 – and also hosted a dinner at New College Nottingham in their Adam’s Restaurant, where I took the opportunity to speak with the students about how working long, unsociable hours in a restaurant environment can affect stress levels and that they need to keep hydrated to reduce their risk of potential stroke.”

Although Adam has pushed himself hard and is extremely grateful to have recovered well from his stroke, he has still faced unwarranted, challenging situations when out and about from others who question his “disability”. 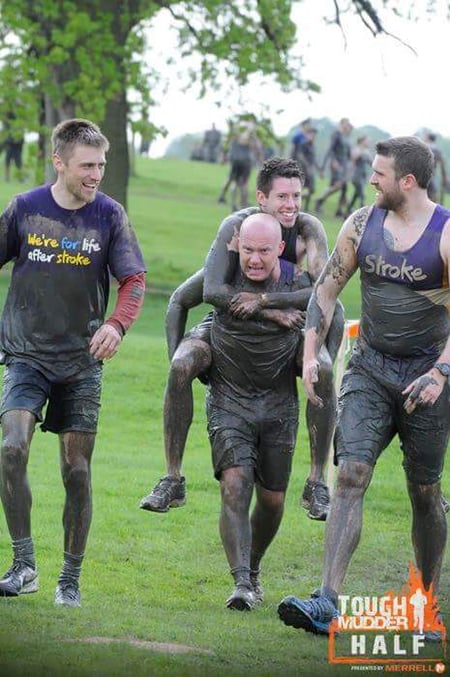 “To look at me, it’s very likely you’d see nothing to suggest I have a disability, and lack of awareness raised around stroke in younger people means hardly anyone would assume I’d experienced such a life-changing event. But in high anxiety situations, physical symptoms like speech difficulties become apparent. Everyday tasks can set it off, such as feeling as if I’m going too slowly when packing my weekly shop or queuing at the doctors and needing to take up more time at the reception desk.

“There have been times when I’ve used public transport and felt pretty victimised. As I’ve had brain surgery, I no longer hold a driving license so I applied for a disability railcard and a mobility card to use on trains and buses. I’ve been questioned about my “disability” on several occasions and asked by the conductors to prove who I am because, according to them, ‘you don’t look disabled’.”

“A gentleman I met at one of my Brain Clinics has been left with a serious stammer and speech impediment after his stroke and nearly everyone he meets assumes he is drunk. There have been a number of occasions when he has been asked to leave shops because staff members do not take the time to understand and investigate the situation.”

“Stroke is a silent battle; you have to learn to be independent as quickly as possible.”

Although Adam has come a long way since his stroke experience, he has been left with residual right side weakness and will never recover 100%. His facial droop has gone and minor movements in his hands and arms have improved but his grasp is still weak and he also has hemiplegic migraines which can cause symptoms that mimic those common to strokes, such as right side tingles or temporary paralysis.

Whilst recovering at home, Adam soon realised that simple daily tasks which used to take a few minutes, such as making a cup of tea, was suddenly a 20-minute job. Similarly, filling out forms to let others know about his stroke was a chore due to his weak grip. Thankfully, companies such as NRS Healthcare offer “daily living aids” to help those living with symptoms of healthcare conditions to continue living as independently as possible at home, and Adam was able to use equipment such as writing aids to help him adjust to his new reality. 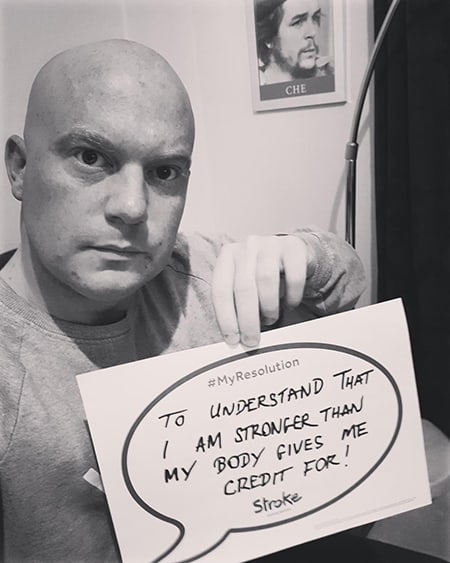 The stroke has also taken its toll on Adam’s mental health and he hopes sharing his story will help raise awareness to others how long and lonely the journey to recovery can be.

“The emotional effect of stroke is something people don’t understand. I pushed myself as much as I could but it’s a very lonely journey. I’ve lived with low moods and depression all my life which, interestingly, surgeons said they weren’t surprised at due to where the “birthmark” was on my brain. But even once I’d had the “birthmark” removed, that first year of recovery was still very tough and I actually went through 2 suicide attempts. I kept thinking “Is this how I’m going to feel for the rest of my life?”

“I’d be amazed if anyone could go through it on their own. A major part of my recovery was attending Brain Clinic. I found it made my journey much easier to be around people who could empathise with how you were feeling. Even if, like me, you’re fortunate enough to have the loving support of family and friends, you can be surrounded by people but feel so alone.”

“Stroke can happen to anyone at any time.”

Using his large following on Twitter, Adam intends to continue using social media to raise awareness of the fact that stroke can happen to anyone at any time and is positive about the future.

“I’ve recently been made an Ambassador of the Midland Food and Drink Awards for my services to the hospitality industry, so I’m looking forward to seeing where that leads me. I’ve also got some fundraising events lined up over the next few months, the proceeds of which I intend to use to continue growing my grand total for the Stroke Association.”