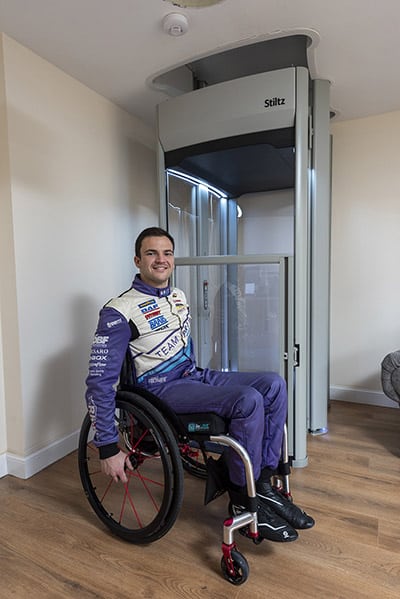 A homelift installation from Stiltz has given disabled motorsport driver Aaron Morgan the same freedom at home as he enjoys in the car.

Aaron is an exceptional racing driver, making himself a name in the sport. He came third in the Britcar Endurance Championship and is moving up to the prestigious British GT Championship, but what makes Aaron special is that he is a wheelchair user who races alongside able-bodied competitors.

He says his Stiltz homelift has finally given him the same freedom at home as he enjoys in the car.

Racing has always been in Aaron’s blood with a self-confessed need for speed. He took to motocross aged seven, but in 2006, aged 15, he had a life-changing accident on the track, leaving him in a coma for a month and paralysed from the waist down.

“All my friends and family surrounded me with support and positivity which really helped,” he comments.

This positivity drove him to quickly adapt to his new life and, in 2008, became the youngest disabled person to achieve a racing licence.

He debuted on the grid in the Production BMW Championship in 2011, and he was awarded ‘Driver of the Year’ at the end of his first season. Next, he moved to BMW Compact Cup Championship where he came to the attention of Team BRIT, a unique team comprised of drivers with varying disabilities who compete in major races alongside able-bodied competitors.

Founder of Team BRIT Dave Player had seen Aaron in action and decided to get in touch. Soon he was offered a seat driving in the Aston Martin.

Aaron adds: “I love the speed and the competitive nature of motorsport but I’ve also made some fantastic friends. Racing gives me a chance to compete on a completely level playing field. When I get into the race car my wheelchair gets left in the pit and it’s just me and the car. I leave my disability behind.”

Unfortunately, there was a world of difference between the freedom Aaron enjoyed racing to the independence he had in his own home; that is until he took delivery of a Stiltz Homelift.

“All the stress of getting upstairs has gone. I no longer have to rely on anyone to help me,” he explains. “I work from home and I’m far more independent because now I’m not stuck downstairs all day.

“It’s lovely that I can tuck my step son in and read him a bedtime story – I’ve not been able to do that before.”

Aaron’s friends are pleased for him and the change the homelift has made.

“My mates love the Stiltz – they come in and all want a go in the lift,” he laughs. “It looks really good too and that’s important to me.”

All this couldn’t have come at a better time for Aaron, as his life is about to get busier. He and Team BRIT are embarking on the next level of racing by entering the British GT Championship in 2022. This is where Aaron gets to compete alongside the very best, and he is excited by the challenge.

Stiltz Homelifts says it is proud to have been able to give Aaron the same freedom in his home that he enjoys on the tracks, and hopes the firm has helped him in his future success.

We are proud that Stiltz Homelifts are able to give Aaron the of freedom in his home that he enjoys on the track and hope in some small part we have helped him in his future success.