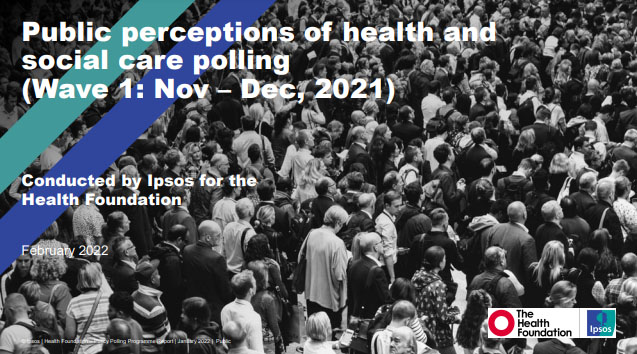 The Health Foundation has shared the findings of a new survey, delivered in partnership with Ipsos, that explores public perceptions of health and social care.

The COVID-19 pandemic has caused major shifts in public attitudes towards health, the NHS and social care. With services still experiencing substantial pressure from the virus itself and related disruption, Health Foundation says it is important to understand how people perceive the current state of care and priorities for the future.

Conducted between 25 November and 1 December 2021, the survey received a total of 2,102 responses from people aged 16 and older across the UK via Ipsos’ KnowledgePanel, a random probability online panel.

The recent findings from this survey are part of a new programme of polling research by the Health Foundation and Ipsos that will track public views on health and social care every six months.

As highlighted in the survey, the public is pessimistic about the state of the NHS and social care. More than half of the respondents think the general standard of care provided by the NHS has got worse in the last 12 months, while over two-thirds think the standard of social care services has deteriorated.

Some of the factors people attributed to these negative feelings include pressure on NHS staff, waiting times for routine services, growing public awareness of how the pandemic has impacted social care, and continued restrictions on care home visiting.

Expectations for the next 12 months are slightly less pessimistic but still low: 43 percent think NHS standards will get worse, while 53 percent think the same about social care.

In previous years, local NHS services have been viewed more positively than the NHS overall, but this is no longer true: perceptions of the service locally and nationally are now very similar. Less than half think the NHS is providing a good service nationally (44 percent) or locally (42 percent).

While the UK Government is yet to commit to a plan for addressing long-term NHS staff shortages, expanding and supporting the workforce is a pressing issue for the public. People’s top priorities for the NHS include addressing the workload pressures on NHS staff, increasing the number of staff in the NHS, and improving waits for routine services.

Although respondents acknowledged the lengthy NHS waiting lists, the survey found that only a minority of people currently or are likely to pay for private health care with 13 percent already paying and 23 percent very or fairly likely to do so. However, being able to access care and treatment more quickly is the major attraction for most of those who already pay or are likely to pay.

Recently, the UK Government announced that it is looking to revoke its decision to make COVID-19 vaccines a condition of employment for all frontline health and social care staff. The British Healthcare Trades Association’s William Lee has said that easy-to-follow guidance is needed immediately that clearly details who can work on the frontline now.

Interestingly, the survey further found that 58 percent of the public support the government’s decision to raise taxes to spend more on the NHS and social care, with only 22 percent opposing. At the time of polling, importantly, the fieldwork for the Health and Social Care Levy was yet to come into effect.

Health Foundation concludes: “The public mood around the state of health and social care seems to be particularly bleak at this moment – especially in England – but our previous polling throughout the pandemic has shown how quickly public views can shift. Every 6 months we will continue to monitor and report on how public perceptions are evolving in these areas and others.”