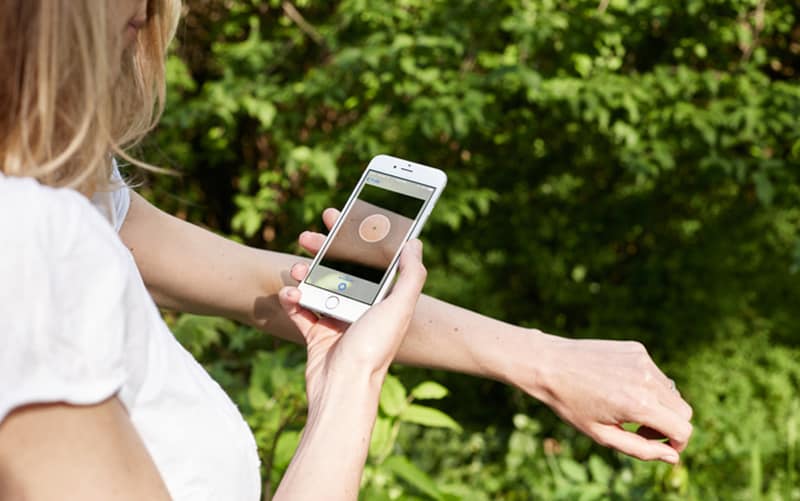 SkinVision has launched the first certified skin cancer risk analysis app offering a tool for analysing moles and other skin conditions for the three most common types of skin cancer: melanoma, basal cell carcinoma and squamous cell carcinoma. The simple and effective app is an at-hand solution for self-monitoring and it’s already saving lives.

Most common cancer in the UK

Skin cancer is now the most common cancer in the UK and for many, it can prove fatal. Every year 2,500 people die due to skin cancer; that’s seven people every day.

Incidents of melanoma, the most deadly form of skin cancer, is also rising. Since the 1970’s melanoma has quadrupled amongst women and increased sevenfold in men.

How the SkinVision app works

The app is the first in the world to use a mathematical formula incorporating fractal geometry in risk analysis. The app’s algorithm calculates the fractal dimension of skin lesions to build a structural map that reveals the different growth patterns of the tissues, providing an instant online risk assessment.

The SkinVision app has an 88% sensitivity score to detect melanoma skin cancer. That makes the app a supportive tool for traditional GP check-ups, to improve the accuracy of those checks. It’s an example of how digital tools are changing and supporting the healthcare system in the UK.

SkinVision CEO Dick Uyttewaal said: “We’re pleased that SkinVision is available in the UK where we can really work with individuals and the healthcare system to raise awareness about the importance of skin cancer checks. The SkinVision application provides ever-improving technology to regularly track moles for changes and enable timely visits to a doctor. In the UK, a country with rising skin cancer rates, awareness of one’s own skin has never been more important.”

Caroline Salmon says the app saved her life. The Cambridgeshire 49-year-old, who is mum to Beatrice, 18, and William, 16, says: “I have always had fair skin but love being in the outdoors. Then in 2015, I noticed that what seemed to be an innocent freckle on my right leg, had begun to subtly change size and shape. Having worked as a health care professional for most of my life, I had seen many pictures of what to look out for with regard to melanomas.

“Then I came across the SkinVision app on Facebook. After taking a photograph and analysing the freckle I saw the reply was “High risk”. As soon as possible, I made an appointment to see my GP who told me that I was the third person to use the app.

Pretty quickly, I was sent off to the hospital at Addenbrookes Cambridge Hospital, to have the freckle removed. After 2 weeks of recovery, I was desperate to know if the freckle was a melanoma. Four weeks later I received my results over the phone – I did have a melanoma.

“My leg is healing nicely now, but if it hadn’t been for SkinVision then I would never have thought twice about that freckle. I’m grateful the app gave me the push I needed to see my GP.”

SkinVision is available for both iOS and Android Samsung users. People in the UK can download the SkinVision app with a one-month free trial HERE