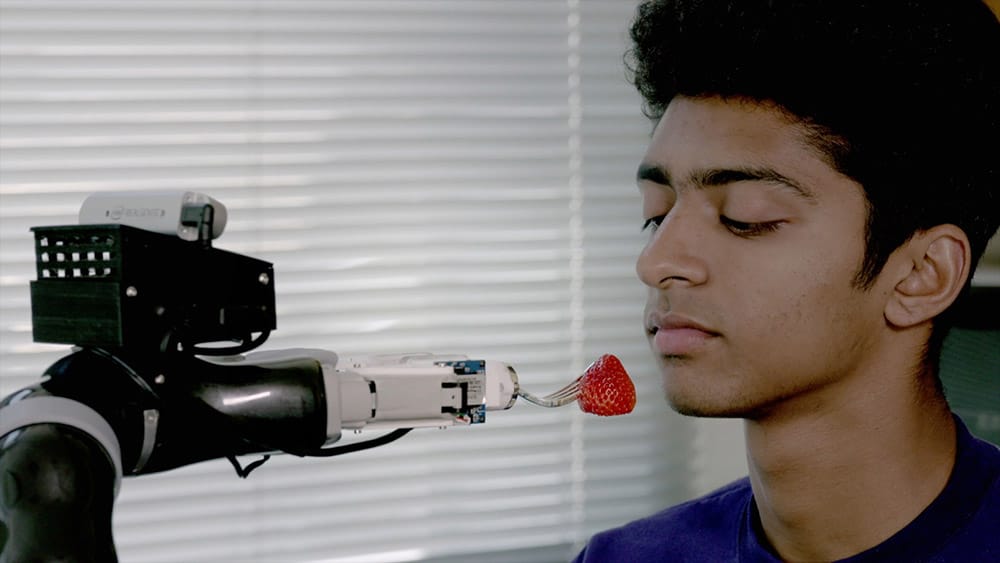 Researchers at the University of Washington have developed an innovative robotic device that helps people to eat, helping make the task easier for individuals who might otherwise require assistance from someone else.

After identifying different foods on a plate, the robot can evaluate how to use a fork to pick up and deliver the desired food to a person’s mouth.

The corresponding author of the project, Siddhartha Srinivasa, said: “Being dependent on a caregiver to feed every bite every day takes away a person’s sense of independence. Our goal with this project is to give people a bit more control over their lives.”

The system attaches to a person’s wheelchair and feeds them whatever they want to eat.

Tapomayukh Bhattacharjee, a co-author of the project, added: “When we started the project we realized: There are so many ways that people can eat a piece of food depending on its size, shape or consistency. How do we start? So we set up an experiment to see how humans eat common foods like grapes and carrots.”

To begin, the researchers arranged plates with various foods featuring different consistencies, like hard carrots and soft bananas. The plates also included foods like tomatoes and grapes, which have a tough skin but soft insides.

Then, the researchers gave volunteers a fork and asked them to pick up different pieces of food and feed them to a mannequin. The fork contained a sensor to measure how much force people used when they picked up food. Although, the robot modelled off this sensor uses a tactile force sensor to pick up a 3-D printed fork; it is a gel-based sensor and the robot measures force based on how much the gel is deformed.

The volunteers used various strategies to pick up food with different consistencies. For instance, people skewered soft items like bananas at an angle to keep them from slipping off the fork, but for items like carrots and grapes, the volunteers tended to use wiggling motions.

Initially, the robot used the same force and skewering method to pick up all the pieces of food. Whilst it was able to pick up hard foods, it struggled with soft foods and those with tough skins and soft insides. Leading to the conclusion that robots, like humans, need to adjust how much force and angle they use to pick up different kinds of food.

The team also discovered that the acts of picking up a piece of food and feeding it to someone are not independent of each other. Volunteers often would specifically orient a piece of food on the fork so that it could be eaten easily.

To design a skewering and feeding strategy that changes based on the type of food, the researchers combined two different algorithms. 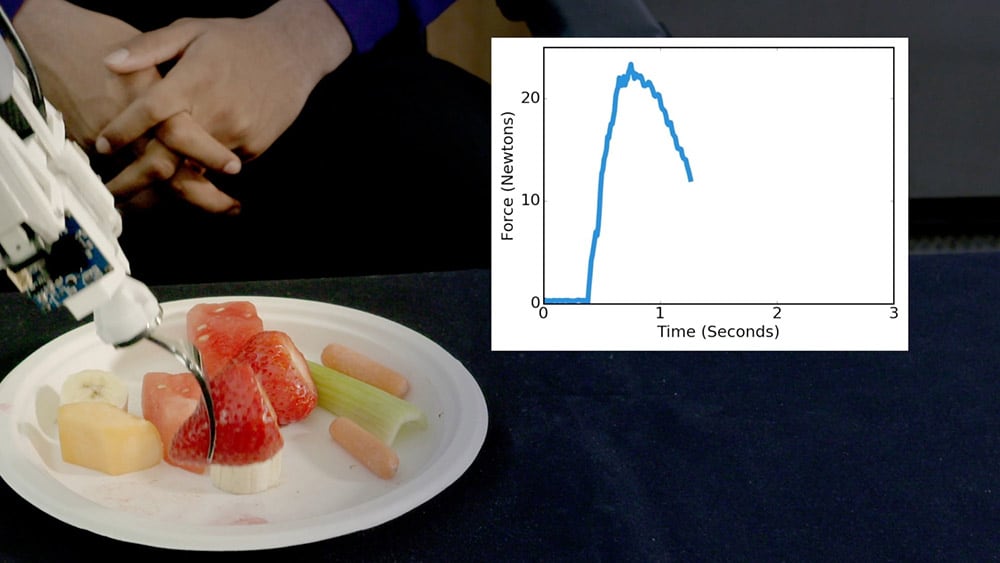 First they used an object-detection algorithm called RetinaNet, which scans the plate, identifies the types of food on it and places a frame around each item.

Then they developed SPNet, an algorithm that examines the type of food in a specific frame and tells the robot the best way to pick up the food. For example, SPNet tells the robot to skewer a strawberry or a slice of banana in the middle, and spear carrots at one of the two ends.

“This research is very intimately connected with people,” Siddhartha said. “If we don’t take into account how easy it is for a person to take a bite, then people might not be able to use our system. There’s a universe of types of food out there, so our biggest challenge is to develop strategies that can deal with all of them.”

Currently, the university is working with the Taskar Center for Accessible Technology to get feedback from caregivers and patients in assisted living facilities on how to improve the system to match people’s needs.

“Ultimately our goal is for our robot to help people have their lunch or dinner on their own,” Siddhartha concluded. “But the point is not to replace caregivers: We want to empower them. With a robot to help, the caregiver can set up the plate, and then do something else while the person eats.”